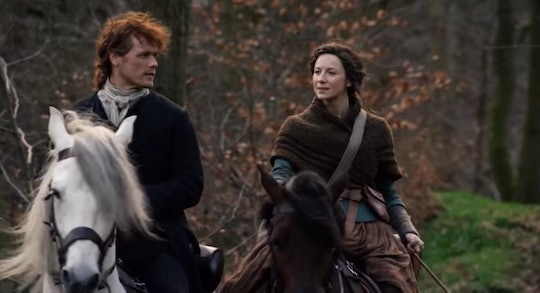 In the fourth season of Outlander, Jamie and Claire find themselves starting a new life in an entirely new place. After traversing countries, continents, and time periods, they've landed in North Carolina in the earliest days of the United States. Though they initially had plans to return to Scotland, it looks like they're going to be making America their home for the long haul. But where will Jamie and Claire live on Outlander?

Even in a totally new country, Jamie and Claire have friends and relatives to count on; in this case, they're able to rely on the hospitality of Jamie's Aunt Jocasta to find somewhere to stay in North Carolina. In the Season 4 premiere, Jamie and Claire make their way to her home, but that won't be where they stay forever. Jocasta is the younger sister of Jamie's mother, and the owner of the large plantation River Run. It will provide Jamie and Claire with a place to stay as they get on their feet, but it will also create conflict. In an episode clip shared by TV Line, Claire and Jocasta argue over slavery: Jocasta relies on slavery to run her plantation, which Claire disapproves of for obvious reasons.

It might make the Frasers' tenure in River Run a tense one, but they have the promise of their own land to get them through it.

While attending dinner at the Governor's home in the first episode of the fourth season, Jamie was offered a land grant to remain in North Carolina. Claire was wary about this, considering the historical and moral implications; after being on the opposite side of the English for so long, aligning with them in North Carolina ahead of the American Revolution could put them on the wrong side of history. But several things inspire them to reconsider, including Jamie's desire to build a better life for their American daughter and Fergus and Marsali's decision to stay once she discovers she's pregnant. They're also beset upon by pirates and the robbery means the land could be the only asset they have left.

Despite any qualms they might have, executive producer Maril Davis explained to Vanity Fair why having their own land was so significant to Jamie and Claire. "What they have here is this opportunity to have a home and roots, which is so important to Claire, because they’re kind of nomads," Davis said. According to her, the idea of what makes a home is one of the major themes of the season.

Fans of Diana Gabaldon may be looking forward to Jamie and Claire's more permanent American residence, Fraser's Ridge. Though they're not quite there yet (and building a house won't be without its difficulties), Fraser's Ridge should be making an appearance before you know it. Series stars Catriona Balfe and Sam Heughan gave a tour of the Fraser's Ridge set to Entertainment Tonight, where Balfe commented on how different it felt compared to previous sets.

"[Outlander production designer Jon] Gary Steel has done yet another amazing job," Heughan said. "We do have a few episodes where Jamie is beginning to build this and it's remarkable to see the sort of handiwork."

Settling in the States heralds a new start for Jamie and Claire, and it's one that will start with creating a new home.