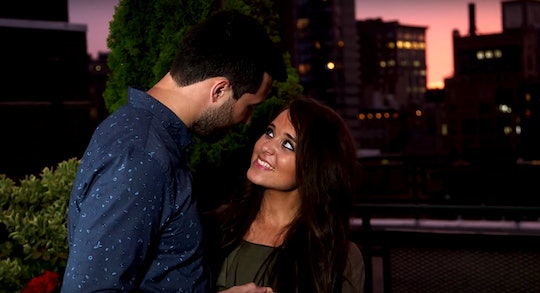 There's a lot of interesting things about the Duggar family — the main thing, of course, being the fact that there are 19 children in the immediate family. To help raise their kids, Duggar parents Jim Bob and Michelle had their older children help care for the younger children, meaning many Duggars are very prepared when it comes time to raising kids of their own. That skill will certainly come in handy for 24-year-old Jinger Duggar Vuolo, who is currently expecting her first child with husband Jeremy Vuolo, 30. And with her due date around the corner, Counting On fans are likely wondering: Where will Jinger Duggar raise her daughter? Will she be near the rest of the Duggars?

As Counting On fans likely know, Jinger grew up in the Duggar family home in Tontitown, Arkansas — but when she married Jeremy, she moved to Laredo, Texas to live with him. Jeremy, a former soccer player, now works as a pastor at Grace Community Church in Laredo, according to his profile on the church's website. So naturally, fans might assume Jinger and Jeremy would be raising their daughter in Laredo, which is on the border of the United States and Mexico. However, based on a recent Instagram post of Jeremy's, it seems like there's a chance the couple may be moving across the country soon...

In mid-May, Jeremy took to Instagram to share that he had been accepted to The Master's Seminary, which is a pastoral school in Los Angeles, according to its website. "I am so grateful to the Lord, as well as to Pastor John MacArthur and @revaustintduncan, for giving me the incredible opportunity to begin theological and pastoral studies at @mastersseminary," Jeremy wrote on Instagram alongside a photo of his acceptance letter. The post sparked rumors that the couple might be relocating to California, as In Touch Weekly reported. However, a look at The Master's Seminary's website reveals that the also school offers online and satellite programs.

Considering Jinger is currently about 36 weeks along (according to a recent Instagram post), it seems likely that the couple will continue living in Laredo for at least a little while. Not to mention, moving with a newborn sounds like a pretty exhausting experience. However, there is still a chance that the couple could move to Los Angeles, or even to Dallas, which seems to be The Master's Seminary's closest satellite location to Laredo, according to its website.

No matter where Jinger and Jeremy choose to raise their daughter, it's clear that they are so excited to be parents. When they announced they were expecting back in January, they wrote on their joint blog:

Truly, the Lord’s mercies are new every morning! Now, the journey has taken an exciting turn: We are expecting our first child! We are praising God for this beautiful gift and ask that you join us in praying for a safe and healthy pregnancy.

Naturally, Jinger's large arsenal of family members have been supporting her throughout her pregnancy. She has experienced morning sickness and fatigue, and she said her family's advice when she wasn't feeling well was really helpful. "They’ve said "Just take a nap, don’t feel bad if you need to lay down in the middle of the day," she told Us Weekly in March. "... Especially when I was in all the morning sickness, I talked to them a lot about what they did, how they got through their morning sickness and I think that was some of the best advice — just resting, taking it easy."

According to Jeremy's Grace Community Church profile, Jinger's due date is sometime in July — so Duggar baby watch is officially in full swing.