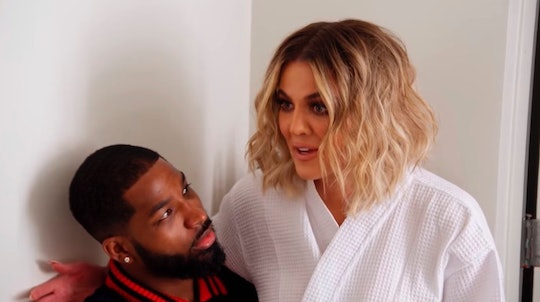 Khloé Lives In Cleveland & Calabasas Now, But Where Will She Call Home After She Gives Birth?

There has been a baby boom in the Kardashian family. Kim Kardashian and Kanye West welcomed their third child in January and Kylie Jenner gave birth to her first child with Travis Scott on Feb. 1. Who's next? That would be Khloé Kardashian, who's due in just a matter of months. The 33-year-old expectant mama has previously revealed that she plans to give birth in Cleveland, Ohio, according to Us Weekly, but where will Khloe Kardashian live after she gives birth and where does she plan to raise her baby-to-be?

Throughout the course of her relationship with boyfriend Tristan Thompson, Kardashian has been spending a great deal of time in Cleveland, as Us Weekly reported, where Thompson plays basketball for the Cleveland Cavaliers. But, Kardashian has a notoriously close-knit family, so would she want to be so far away from them once she brings her first little one into the world? Or will she raise her baby in Calabasas, California with her sisters and mom close by? Given what she's said recently, it really could go both ways.

Kardashian has previously said on Keeping Up With the Kardashians that she enjoys being with Thompson in Cleveland, so it's possible she'll decide to live there after giving birth. But she's also shared that she misses her family on the West Coast when she's there. "I feel bad that I'm in another state and I'm kind of leaving you guys, or even just missing certain things," she said on an episode of KUWTK. "The only thing I wish is that we were in L.A. and we could all be together. But that's not the way it is, so I've just got to put myself first."

Indeed, her strong family ties may very well bring the new parents to California after they welcome their bundle of joy in Cleveland. After all, Kardashian was there for her sisters Kourtney and Kim when they gave birth, acting as the "leg-holder" in Kim's delivery room, according to Refinery 29. And she's been a present aunt for her nieces and nephews, so it would certainly be tough to leave them as well.

There's a strong case to be made for living in California, but it's also just as possible for Kardashian to relocate to Ohio. After all, she did spend both Thanksgiving and Christmas with Thompson's family in Cleveland and still travels there often well into her pregnancy, according to Us Weekly. And her plans to give birth in Cleveland is certainly telling.

Also, given her past when it comes to relocating for her partner, Kardashian has done so before. When Kardashian was married to Lamar Odom, she moved to Dallas, Texas in 2011, when Odom was traded to the Dallas Mavericks, according to E! News. And, though she missed her family, she was loyal and stuck by her husband at the time.

So, it's safe to say that with Thompson's home base being Cleveland, Kardashian could definitely settle down there and just keep a second home in California, traveling back and forth with her baby and Thompson.

Currently, Kardashian splits her time between Cleveland and California. She could potentially continue to do that, at least for a few years, while her baby is too young to be in school. But, ultimately, she and Thompson will have to make a choice. My bet is on California, but they'll obviously make a loving home wherever they decide.