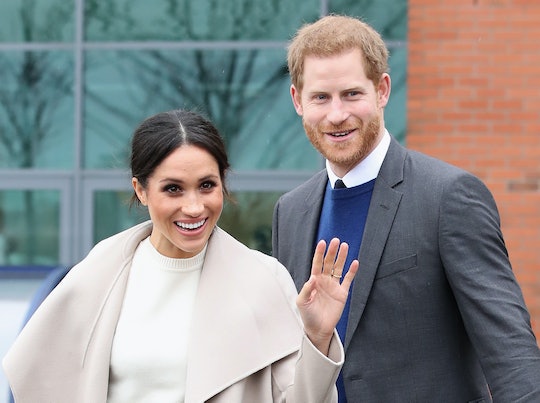 Here's Where Meghan Markle & Prince Harry *Could* Go For Their Honeymoon

While many details about the upcoming royal wedding have been revealed already — like the cake, the florist, and the location and date, of course — there's one thing everyone is still guessing about: Meghan Markle and Prince Harry's honeymoon destination. Where exactly (and when) Markle and Prince Harry will spend their honeymoon still hasn't been confirmed, but there are definitely some top contenders.

The soon-to-be newlyweds have plenty of eyes on them as they prepare for their big day and the world will certainly be watching as they tie the knot on May 19. So it would make sense if they decided to head somewhere more private for their post-nuptial getaway. And according to several British tabloids, it looks like they could be heading to a pretty special location for Prince Harry. According to the Daily Mail, "Prince Harry has his heart set on a honeymoon in Namibia with Meghan Markle."

On the other hand, though, there are plenty of other honeymoon destinations that could be on the happy couple's radar. And until they actually go on their honeymoon following their wedding this May, the world might not actually know what their plan is.

Rumors aside, though, it looks like somewhere in Africa is a popular choice for the couple to take their honeymoon and given their history together, it makes sense. After all, they've had some pretty important moments there. According to The Cut:

The couple has already been to Africa together at least twice that we know of — they went to Botswana on one of their first dates (as one does) and later returned to Africa for a three-week holiday — and Markle’s engagement ring includes a diamond from Botswana.

So, perhaps they'll want to take a trip back to the continent and pay homage to their beginnings as a couple. There's also the possibility that because a honeymoon is typically a once-in-a-lifetime event, they could opt to travel somewhere brand new. And the options for the happy couple are practically endless.

Plenty of publications have taken guesses as to where they'll be headed and the spots are all across the map. For instance, The Telegraph reported that they might be headed to the Philippines, because "Palawan in the Philippines is on Meghan's holiday wishlist, according to the Instagram feed of her former lifestyle blog The Tig." And that's not all. According to CNN Travel, Nevis in the Caribbean could be a solid choice as well because "Prince Harry's mother Princess Diana was a huge fan of Nevis and took the prince and his brother William for an extended vacation in the lesser-known Caribbean island back in 1993."

There are plenty of options for the two to celebrate their wedding, but at the end of the day, it looks like Africa, and Botswana in general, would be the top contender. As CNN Travel reported, Prince Harry has even referred to the country as his "second home," and so it would make sense that they would want to celebrate their marriage by going back to that special place.

Really, though, no matter where they go, they'll be full of wedded bliss and will likely have the time of their lives, hopefully without the stress of being followed by paparazzi. Whether it's somewhere in Africa, Asia, or the Caribbean, hopefully, Prince Harry and Markle will be able to enjoy this time as newlyweds to the fullest.