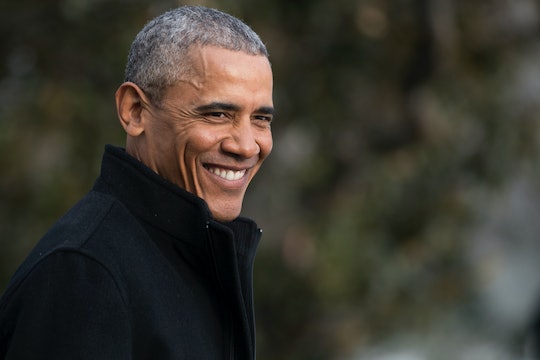 Obama Heads To Chicago For His Farewell Speech

As Inauguration Day nears, President Obama is preparing to give his farewell address to the nation on Jan. 10 — but he won't be giving it in Washington. Where will Obama deliver his farewell speech? According to The White House, Obama will be giving his final address at McCormick Place in Chicago, Illinois, making it "the first time that a President has returned to his hometown to deliver such a speech."

According to Reuters, the tradition of the presidential farewell address began with President George Washington, who delivered his own farewell speech in 1796 in an attempt to support a peaceful transition of power to the next administration. Now Obama will continue that tradition (like his predecessor President George W. Bush did before him in 2009, according to CNN), and while he has said in an email to supporters that he plans to use the speech an an opportunity "to say thank you for this amazing journey, to celebrate the ways you’ve changed this country for the better these past eight years," his farewell address is also thought to be his final opportunity to speak publicly about preserving aspects of his presidential legacy — like the Affordable Care Act — that Trump has vowed to repeal, according to TIME.

In his first weekly address of 2017, Obama discussed his plans to deliver his farewell address, and spoke about the significance of choosing Chicago as the place to do it:

Since the days of George Washington, presidents have delivered some form of final message while in office – a farewell address to the American people.

On Tuesday night, in Chicago, I’ll deliver mine. I chose Chicago not only because it’s my hometown – where I met my wife and we started a family – but also because it’s really where my career in public service began.

He also reminded Americans that change occurs when people come together to work for it, and encouraged Americans to think long-term and to not be discouraged about what may lie ahead:

It’s easy to lose sight of that truth in the day-to-day back-and-forth of Washington and our minute-to-minute news cycles. But remember that America is a story told over a longer time horizon, in fits and starts, punctuated at times by hardship, but ultimately written by generations of citizens who’ve somehow worked together, without fanfare, to form a more perfect union.

That hopeful message is one the President echoed in an e-mail to supporters Monday, according to TIME, in which Obama wrote,

Since 2009, we've faced our fair share of challenges, and come through them stronger. That's because we have never let go of a belief that has guided us ever since our founding — our conviction that, together, we can change this country for the better.

That doesn't mean though, that we shouldn't expect him to include some important words of wisdom for President-elect Trump. According to CNN, it's likely that Obama will make a note to emphasize the importance of celebrating American diversity, to be more tolerant of critics, and to be respectful of democracy.

Those looking to see Obama's farewell address in person might still be able to get tickets — but it won't be cheap (and quite possibly not even legal). Although free tickets were distributed to the public on a first-come-first-served basis at McCormick Place on Jan. 7, according to the the Chicago Tribune, the demand for tickets was so great — several thousands of people lined up to get them, and they were scooped up immediately — that many are now reportedly being resold online for upwards of $5,000 each.

But Obama's farewell address won't be the first event meant to mark the end of his presidency. The Obamas hosted a party at the White House Friday to celebrate the end of his two terms, according to People — and while Trump may claim to not be interested in star power at his inauguration, there was clearly no shortage of it for Obama's send-off. According to The Daily Mail, Meryl Streep, Paul McCartney, Sarah Jessica Parker, Tom Hanks, Samuel L. Jackson, Nick Jonas, Olivia Wilde, Jason Sudeikis, Jerry Seinfeld, John Legend and Chrissy Teigen were among those invited to celebrate the president (many of whom stayed to party until 4 a.m.).

The good news for anyone who wasn't waiting in the cold for tickets? Obama's farewell address will be televised Tuesday at 8 p.m Central Time and 9 p.m. Eastern Time as well as streamed online at the White House website, and on the White House Facebook page.