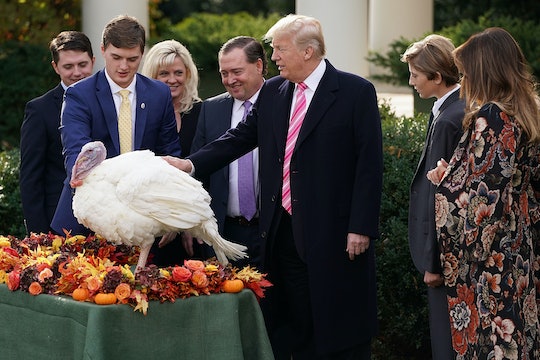 Here's What Trump Will Be Up To On Thanksgiving, In Case You Were Wondering

One of the best holidays of the year is right around the corner and families across America are breaking out their stretchy pants and thawing their turkeys. But what about the first family? Where will Trump celebrate Thanksgiving? It looks like he and his nearest and dearest will be heading down south.

The Sun Sentinal reported that President Donald Trump and his family will be returning to their private Mar-a-Lago club in Palm Beach, Florida for Turkey Day 2018. The POTUS opted for a Floridian celebration last year as well, indulging in a luxurious feast at his members' only club, surrounded by glitz, glamour, and gold accents, according to Newsweek.

But what exactly does a presidential Thanksgiving spread look like? Likely it looks much like your own, according Stephanie Grisham, a spokeswoman for the first lady's office. Last year she told CNN that the family had "all the traditional fare," including turkey, stuffing, mashed potatoes and gravy, sweet potatoes with marshmallows, baked mac and cheese. Along with what usually makes up a Thanksgiving dinner, the Trumps had a few seafood dishes on the table as well, such as grilled diver scallops — when in Florida after all. Reporters onsite told CNN that there were 24 dishes in total.

It's not all yams and pumpkin pie for the president on Thanksgiving, though. Last year, Trump squeezed in some presidential duties as well. He started the day by tweeting out to his constituents a list of all that they had to be thankful for — all courtesy of himself, of course:

HAPPY THANKSGIVING. Your country is starting to do really well. Jobs are coming back, highest Stock Market EVER, military getting really strong, we will build the wall, V.A. is taking care of our Vets, great Supreme Court Justice, RECORD CUT IN REGS, and lowest unemployment in 17 years!

Along with dinner and duties at Mar-a-Lago, Trump also participated in a presidential Thanksgiving tradition: the pardoning of the White House turkey. Two days before the country chows down on some tasty gobblers, the POTUS spared some turkeys and sent them to live out the rest of his days in a safe haven — far away from the gravy and stuffing.

This year's lucky turkey, or I should say turkeys, are named Peas and Carrots. According to the White House, they were raised on a farm in South Dakota by NTF Chairman Jeff Sveen and turkey grower Ruben Waldner. The White House created a Twitter poll to let the people cast their votes for who should receive the official pardon. Prior to their big day, the two turkeys enjoyed almost as lavish accommodations as the president pardoning them. Fox News reported that they will be hanging out in the Willard InterContinental Hotel in downtown Washington, D.C. until they check out on Tuesday.

In preparation for the upcoming holiday, numerous news outlets are pointing out the disparity between Trump living it up in Mar-a-Lago and the troops dining on rations at the border at his order. Shortly before the midterm elections, the POTUS ordered roughly 5,600 troops, with 1,400 more to follow, to the border in response to the "national emergency" of Central American asylum seekers, The Washington Post reported.

Only time will tell if Trump makes a visit to the troops before he heads to Mar-a-Lago to show his appreciation. According to The Washington Post, past presidents, such as George W. Bush and Barack Obama, opted to spend their Thanksgiving holidays honoring those who serve in the armed forces and it's not clear right now if Trump will decide to do the same.