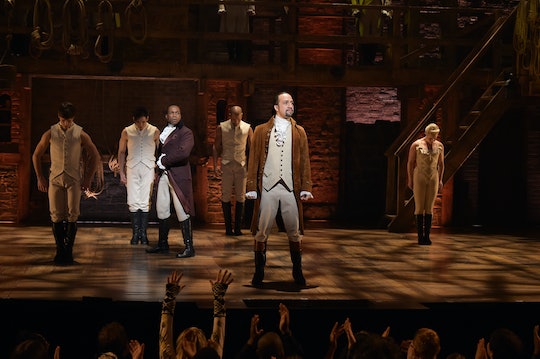 Where You Can Rewatch The Tonys 'Hamilton' Performance Again & Again

This year's Tony Awards was filled with show stopping performances and it'd be hard to pick a favorite one. From the wonderful voices of Danielle Brooks and Cynthia Erivo from The Color Purple to the stunning medley from Sara Bareilles and the cast of Waitress, the Tonys put on a great show this year. But it was clear from the get-go that fans were most excited to see Lin-Manuel Miranda and the rest of his Hamilton patriots perform. And whether you're a history buff or Broadway baby, chances are you want to know where you can rewatch the Tonys Hamilton performance.

The cast performed in the James Corden's opening number, as well as numbers from their Grammy-winning and platinum album, and it wouldn't be surprising if their album jumps to number one on the charts again after this performance. If you're one of those that unfortunately missed watching it live you can watch it or rewatch it below:

If that doesn't make you want to listen to the Hamilton soundtrack on repeat nothing will. Who knew it would only take a hip-hop musical to get the world interested in the Founding Fathers? From the rapping to the choreography, it's no surprise that Hamilton is the hottest ticket on Broadway right now. Earlier this month CBS gave us a little teaser of the Hamilton performance with a 360 degree video of the cast performing "Wait For It," which should've been our first clue that Hamilton cast would kill it at the Tonys.

Although nothing compares to actually seeing Hamilton live onstage, these videos will just have to be enough for us for now. But don't worry, you won't be the only watching these videos over and over again. Surely everyone will be doing the same thing because let's face it, the Hamilton cast blowed us all away.