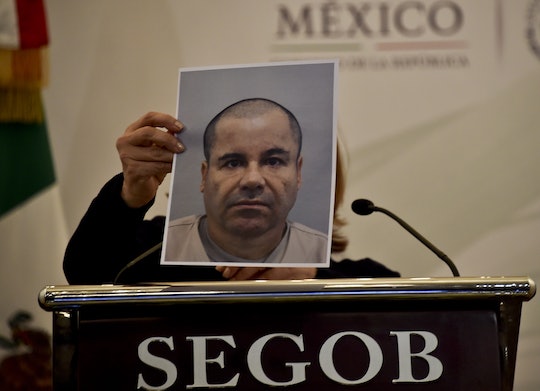 Where You Can Watch El Chapo's Interview With Sean Penn

Not long after the infamous drug lord Joaquin Guzman, known as El Chapo, was recaptured by Mexican authorities, rumors surfaced that Sean Penn had interviewed him while he was on the lamb. Those rumors turned out to be true. Rolling Stone printed an excerpt of that interview, but as more and more questions arose about the meeting, readers will want to watch El Chapo's interview with Sean Penn, because it's finally out in full.

Rolling Stone has since made the entire 17-minute interview available on its website. Penn was not able to meet with El Chapo in person, so he instead emailed El Chapo a list of questions that he answered in front of a camera. For being notoriously mysterious and allegedly violent, El Chapo comes off as candid, nostalgic, and even kind in the video. He wears a paisley collared shirt, a ball cap, and sits in what looks like his back yard. Penn asks him about his difficult childhood, his start in the drug trade, his outlook on Mexico's future, and if he considers what he does a cartel (he does not). At one point Penn asks if he thinks the drug trade will end, and El Chapo seems to answer with some sadness when he says he doesn't think it will.

Regardless of the value of this material, Penn is now under scrutiny for the legality of his rendezvous with the Sinaloa kingpin, who, at the time, had just escaped from prison. Penn has denied any involvement with the wanted man, other than this interview, and denied that it warrants any sort of indictment. Penn may sit for an interview with CBS News' Charlie Rose to clear his name and explain his side of the story.

Penn and El Chapo's relationship allegedly aided authorities in tracking down the wanted man, according to the Daily Mail. Penn had been led to El Chapo by actress Kate del Castillo, and that connection gave them information they needed to raid his hideout in Durang. El Chapo evaded authorities then, but was finally captured months later in Los Mochis, just a day before the interview was published.