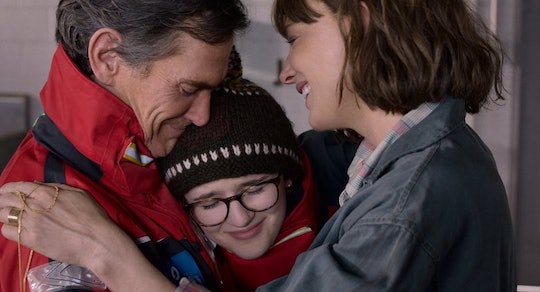 Anyone who’s experienced a fleeting murderous impulse while inching forward in a school pickup line will probably enjoy Where’d You Go, Bernadette?, in which, as suggested by the title, a mother is lost.

Starring Cate Blanchett as Seattle mom Bernadette Fox and featuring Kristen Wiig as Audrey, another mother at the progressive (and Microsoft adjacent) Galen Street School, Bernadette plunges us into a world where surplus maternal energy and ambition is rechanneled in various, sometimes destructive ways. A world where “parent” is a verb, and motherhood is a form of collective hysteria. For anyone who has parented in certain affluent coastal pockets of the country, it would be funnier if it weren’t so recognizable.

Galen School is built on principles of “global connectitude” and other such platitudes of PC junior citizenry. But that doesn’t stop the extreme-volunteer PTA moms (or Galen Street gnats, as the acidic Bernadette dubs them) from judging and policing each other into ever-higher levels of dysfunction. In a way, the massive hillslide that hurls mud into from Bernadette’s house into Audrey’s (who happens to be holding an immaculately planned school function at the time, replete with two kindergarten classes and a living room full of prospective parents) seems an eruption of misdirected energy from these two dynamos.

Although her neuroses do not by any means seem unique, it turns out Blanchett’s Bernadette is not just another mom taking a ten-year-nap from her career; she is a MacArthur “Genius” Grant recipient. Although she’s been living incognito with her Microsoft guru husband, Bernadette turns out to be an incredibly important figure in modern architecture, as we learn when a graduate student recognizes her on the University of Washington campus, begs for a photograph, and then, backing away at her evident reluctance, gives her a final bow in obeisance. The absurdity of the moment only underscores how uncomfortable we are with the idea of motherhood and genius co-existing.

Bernadette is not just another mom taking a ten-year-nap from her career.

But we are to take seriously the loss of Bernadette’s talent. When she goes out to dinner with a former colleague and, accounting for her lost decades, explains she’d always meant to re-emerge as “the true bitch-goddess of architecture,” it seems less like self-deprecation and closer to simple fact.

Although Blanchett does an amazing job embodying some of the novel’s anarchic undercurrents, the dark humor of Maria Semple’s novel has been considerably lightened in Linklater’s adaptation. For example, the aforementioned mud-slide interrupting an important PTA event, is described by Semple as a dangerous melee of the domestic and the primordial. “In it sloshed, through the broken windows. Thick mud, watery mud, rocky mud, mud with beveled-glass shards, mud with window muntins, mud with grass, mud with barbecue utensils, mud with a mosaic birdbath.”

Linklater has set aside some of the sharpness of these shards, downplaying or eradicating disturbing details like suicidal ideation; the ongoing fact of Bee’s possibly life-threatening heart condition (in the novel she’s repeatedly referred to as having blue skin throughout her childhood due to her heart condition); Elgin’s infidelity with his admin (a double betrayal because she’s one of the judgey school mothers aligned against Bernadette).

Still, the stakes are high. Things get destroyed suddenly, and in repeating patterns that make them no less devastating, like the numerous miscarriages Bernadette suffered before she finally brought (and just barely kept) Bee into the world.

It has taken Linklater time to form an opinion on the parenting industrial complex. Though Linklater made his debut as a wiseass with an off-center perspective — anyone who remembers his breakthrough films from the ‘90s, Slacker and his classic stoner comedy, Dazed and Confused is well aware of that — in recent years he’s become more interested in family and the enduring if sometimes strained ties between parent and child. In some ways, his focus on a middle-aged mother in crisis is a continuation of his memorable work with Patricia Arquette in his 2014 film Boyhood.

This film spanned 12 years in the life of a family, with much of the drama residing in the fact that we actually watched all the actors age in real time, since the film was filmed as various junctures throughout an entire decade. When we saw Patricia Arquette weeping when he son walked out the door for college, many viewers were left curious about the continued journey of a woman who had put herself through graduate school and eventually made a career as a psychology professor. (The contours of the character’s journey was evidently worked up between Arquette and Linklater as a sort of amalgamation of their own accomplished mothers.)

Where does a person, in many cases a woman, go when she submerges her identity with that of her family?

Where’d You Go, Bernadette? is actually a sort of philosophical conundrum this time around: where does a person, in many cases a woman, go when she submerges her identity with that of her family, when she “lets herself go”? While the novel makes merry on the insights of Bernadette as a sharp observer of 21st century modes of affluent parenting, Linklater is deeply, almost naively, invested in the idea of art as transcendence. The disruption of Bernadette’s artist destiny (unfortunately at least in part due to the arrival and life of Bee) is a plot driver. As Bernadette’s former colleague observes at their reunion lunch, she’s the type of person who is either being creative or is a menace to society.

It takes her a while to get to the place we know she’s meant to go. Although it sounds like something of a cliche, this panoramic view of Blanchett rowing out alone, navigating her way between sublime, imperilled icebergs in Antarctica, can’t help but stir us, or at least me. And Blanchett transforms herself physically, coming to life, almost, as she finds her task as the mother at the stripped-down ends of the earth (the heaviness of the state of the planet very much in air).

By all accounts, Linklater’s own outlook has changed significantly since the birth of his children. It’s refreshing to read such a thing about a man distinguished in his field. For the most part we are only used to regarding mothering, not fathering, as an avocation. Even more rarely, he puts his money where his mouth is, making movies about families and with a distinct focus on mothers, even aging mothers, as a locus of interest. Linklater dedicates the film, at the end, to his mother Diane, “his Bernadette.” You can tell he really means it.

More Like This
I’m No Singer, But My Children Think I Am
10 Of Drew Barrymore’s Best Quotes On Motherhood
10 Of Céline Dion's Best Quotes on Motherhood
Are You There God? It’s Me, Margaret Is Finally Heading To The Big Screen