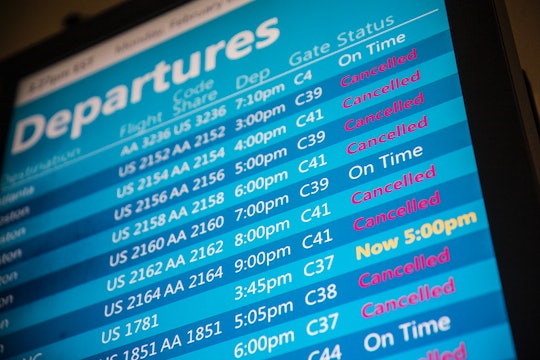 Which Airports Will Be Affected By The Blizzard? Airlines Are Prepping For The Storm

A blizzard is set to make its way up the East Coast beginning on Friday and lasting through Sunday, with predicted snowfall of up to 30 inches and wind gusts of up to 50 miles per hour, according to CNN. It could even break the record of 1922's Knickerbocker storm, whose snowfall totaled 28 inches. With many planning to get out of town for a midwinter holiday, people are wondering just which airports might be affected by the storm, whose path is expected to reach from North Carolina all the way to New Hampshire.

The Washington Post reported that many airlines issued waivers for passengers traveling between Jan. 20 and Jan. 27, meaning those passengers can cancel or reschedule their flights without incurring fees. American Airlines, American Eagle, JetBlue, Southwest, and United all planned to issue waivers to travelers in the predicted path of the storm, but as meteorologists' models evolve, the airports covered could change. So far, the following airports are predicted to be affected:

It's important to remember that the weather is nearly impossible to predict. As of Thursday, the storm was predicted to cause its heaviest snowfall around the mid-Atlantic region, and the Northeast may not even see more than a dusting, according to CNN. As of Thursday, no airports had been closed, and no flights had been cancelled.