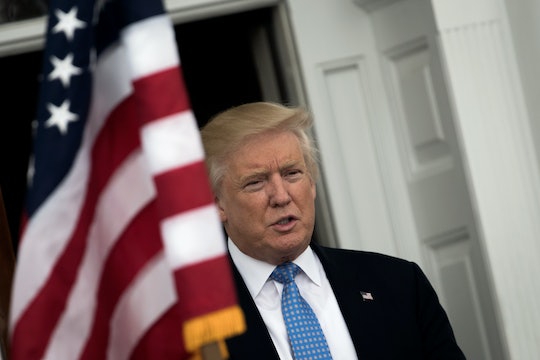 Which Cabinet Picks Can Voters Help Block From Being Appointed?

The whole idea of a Presidential Cabinet is outlined in the Constitution. And as President-elect Donald Trump starts to roll out his appointments, which include controversial hard liners like Alabama Sen. Jeff Sessions and Steve Bannon, many voters are left wondering what they can do to stop it. Which Cabinet picks can voters help block from being appointed? You can call your senator to put pressure on for them to vote down any appointees who require Senate confirmation.

Officially, the Cabinet, according to WhiteHouse.gov consists of the Vice President and the 15 heads of the U.S. executive departments, in addition to several other cabinet-level executive branch jobs. And aside from the VP, many appointees to the cabinet require Senate confirmation, with a few notable exceptions. The White House Chief of Staff, the job Trump has given Reince Preibus, and the job of presidential adviser, the title given to former Brietbart chief Steve Bannon, do not require Senate confirmation, according to CNN. There is little voters can do to influence who is tapped for those posts by Trump. Bannon, in particular, was a highly controversial choice, due to his ties to the racist and xenophobic white nationalist movement.

Trump has also named retired Army lieutenant general Michael Flynn, whose outspoken views against Islam makes many Americans uneasy about how he will advise Trump on the Middle East as his newly appointed National Security Adviser, a job that also does not require Senate confirmation, according to the New York Times.

This is the highest ranking cabinet position, besides the Vice President, and heated competition has emerged for the appointment from Trump. Top names being considered for the post, according to the New York Times, include Trump critic and former Massachusetts Gov. Mitt Romney, former New York Mayor Rudy Giuliani, and former General Davis Petraeus, who was forced to resign from his post as Director of the CIA as the result of mishandling classified information.

Department Of The Treasury

For all of Trump's campaign talk about "draining the swamp," the leading candidates to handle the American economy as Treasury Secretary include Goldman Sachs executive Steven Mnuchin, private equity and real estate investor Thomas Barrack Jr., and GOP insiders like Texas Rep. Jeb Hensarling, and former Minnesota Gov. Tim Pawlenty, according to the Times.

Alabama Sen. Jeff Sessions, who was previously rejected for a federal judgeship in 1986 for alleged racist remarks, has been nominated by Trump to be the next Attorney General. He will likely face similar questions this time around about his past racist comments and activities, according to the Times. Sessions has not responded to Romper's request for comment.

Trump has nominated Kansas Rep. Mike Pompeo to lead the CIA, according to the Times.

Former New York Mayor Rudy Giuliani and well-known Trump loyalist is also reportedly a finalist for National Intelligence, according to the Times.

Department Of The Interior

It's been rumored former Alaska Gov. Sarah Palin could be Trump's appointee to manage the nation's public land, according to the Times.

Kansas Gov. San Brownback is reportedly on the short list of Agriculture Secretary, according to the Times.

Victoria Lipnic is one name being considered for Labor Secretary in the Trump administration, according to the Times.

Department Of Health And Human Services

Republican Governors Mike Huckabee from Arkansas, Bobby Jindal from Louisiana, and Rick Scott from Florida, are reportedly all being considered for HHS Secretary, the Times reported.

Department Of Housing And Urban Development

The Times suspects it's Dr. Ben Carson who is getting ready to make the announcement he will accept Trump's appointment, despite his earlier refusal to take a government job due to lack of experience, according to the Times.

Trump has appointed Betsy DeVos, a Michigan billionaire and fierce advocate for school choice measures her critics say are intended to dismantle public education in America, according to Salon.

Former Massachusetts Sen. Scott Brown is being considered to lead the VA, according to the Times.

Leading the list of possible appointees to the EPA include Myron Ebell, who, according to the Times, is a well-known climate science skeptic.

Trump has appointed South Carolina Gov. Nikki Haley to become U.N. Ambassador, who was an early critic of Trump's during the campaign, according to the Times.

So if any of these appointments bother you, as an American you have the right contact your Senator and ask they vote down Trump's appointments.