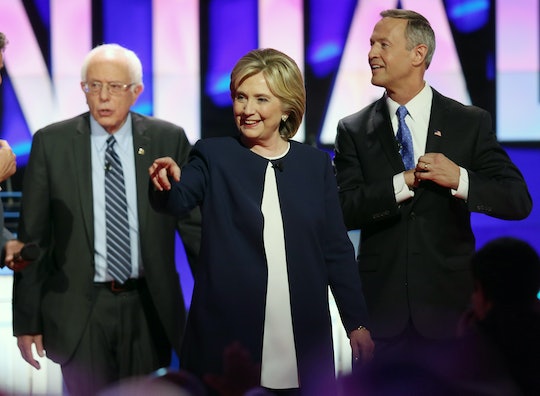 Which Candidates Will Be At the ABC Democratic Debate Dec. 19? The Line-Up Is Familiar

The next Democratic debate on ABC is fast approaching, so ready your remotes and settle in with your popcorn! But what can you expect out of the debate, and which candidates will be at the second Democratic debate? For starters, it will be going down at Saint Anselm's College in Manchester, New Hampshire, and, as mentioned, hosted by ABC News. The network's own David Muir and Martha Raddatz will be moderating, and anybody can jump online to catch the debate wherever they may be. (It will be streaming for free on the ABC News website as well as their various apps available for mobiles, Xbox One, and Apple TV.) But the most important question, of course, is whose faces we'll be actually seeing on stage. In other words, which candidates will be at the ABC Democratic debate on Dec. 19?

The answer should be familiar for anyone who watched the first Democratic debate in November. Once again, Hillary Clinton, Bernie Sanders, and Martin O'Malley will be duking it out in New Hampshire for this one. The latest HuffPost polls, which combine opinion polls across different news sources, place former Secretary of State Clinton in the lead at 56.2 percent, with Vermont Senator Sanders taking second place at 28.5 percent. O'Malley, the former Governor of Maryland, is trailing behind at 3.4 percent — but this debate could be a way for him to boost his lagging numbers.

Topics will likely center on terrorism — after the recent Paris and San Bernardino attacks — and climate change, due to recent resolutions at COP21 in Paris, and Obama's commitment to the issue at Friday's end-of-year conference.

Tune in at 8 p.m. Saturday for the debate, and share your views with the hashtag #YourVoiceYourVote on Twitter. We'll miss Sanders' live tweeting of GOP debates in this one — but hopefully a few watchers will weigh in with their own #Berns.