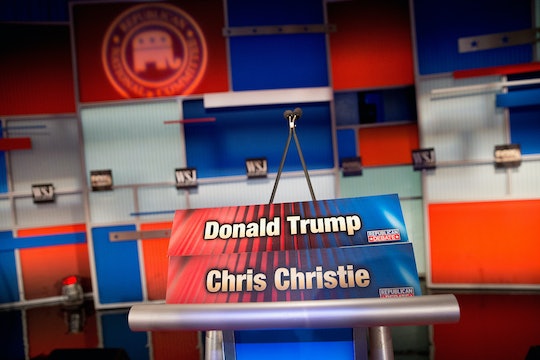 Which Candidates Will Be At The Fourth GOP Debate? What To Know About Who's Left In The Running

When we last left off, there were too many Republicans vying for the presidential nomination to count. Surprisingly, most are sticking to their guns and refusing to drop out of the race — despite polls highlighting three to four clear frontrunners. But which GOP candidates will be in the FOX Business News debate, which airs at 9 p.m.?

Eight Republican candidates will take the stage and duke it out (and, inevitably, be made fun of by Saturday Night Live). But lines were clearly drawn by the second GOP debate. And as Trump began to gain more momentum, questioning why Paul was on stage — only getting 1 percent in the polls — and sparring with former Florida Governor Jeb Bush on building a casino in his home state (of all things), the herd began to thin out. Former Texas Governor Rick Perry and Wisconsin Governor Scott Walker dropped out of the race on Sept. 11 and 21, respectively, leaving the remaining candidates fighting it out in the third GOP debate, the most contentious one yet. It featured Bush and Florida Senator Marco Rubio butting heads, and Texas Senator Ted Cruz getting one of the largest applause breaks as he bashed the mainstream media.

As the divide increases, we’re seeing just how heated up this campaign cycle is getting. With less-than-stellar poll numbers, Chris Christie and Mike Huckabee are out of the main debate. Though, that shouldn't lessen the drama. Anyway, to help you through this chaotic night, here’s a primer on the candidates who will be present for primetime:

At the first debate — which took place in Ohio, the state he governs — it was clear Kasich had a good amount of the live audience on his side. While some hopefuls were touting their spending records, the current Ohio governor boasted his expansion of Medicaid, and his desire to help people who “lived in the shadows” with mental illnesses.

And he differed from his competition in other areas as well. When asked about whether he would support the Supreme Court’s gay marriage ruling despite his beliefs, Kasich responded, “Because somebody doesn’t think the way I do doesn’t mean that I can’t care about them or I can’t love them.”

From criticizing fellow candidates Carly Fiorina and Rand Paul’s looks, to his controversial remarks on undocumented immigrants, Trump has been polarizing to say the least.  Every day it feels like we’re reading  story about the infamous mogul and his colorful comments. Trump is undoubtedly proving that not all press is good press… and it’s leading other presidential nominees and the GOP to distance themselves. While he is a clear frontrunner, many have pointed out that he embodies an issue that plagues the entire party: he’s not quite “getting” millennials. While Trump believes the state of America is unacceptable, the younger generation is optimistic about the present and future — something that doesn’t quite line up with his platform.

Bush is having a far more difficult time clinching the nomination than his father or brother. And it's hard to talk about the former Florida governor without bringing up Trump, who has been one of his harshest opponents. Criticized for being low-energy and weak on immigration, Trump has caused Bush to become more adversarial — even asking Trump to apologize to his wife for comments he made about her. And if it’s not Trump, it’s Paul on Bush's case. During the second debate, Bush was labeled a “hypocrite” by the Kentucky Senator for smoking marijuana while doing nothing to undo Drug War policies which disproportionately affect the poor and minorities.

Carson has gained traction by being cool and collective. Though he rose quickly to the top after the first debate, he gained more attention by not partaking in “mudpit politics” and targeting other candidates. And he also embodies the can-do attitude that the GOP perpetuates; raised by an illiterate mother, Carson grew up to be an established pediatric neurosurgeon. But the honeymoon phase may be over. He has recently defended his comments that the Jews would have combatted Hitler with more guns and prevented the Holocaust. "I'm telling you there is a reason these dictatorial people take the guns first," he claimed. And then there's all that about stabbing a guy. Or not.

A candidate who didn't make it to primetime during the first debate, Fiorina has come a long way. She has gained attention for drawing parallels between Iran and Planned Parenthood and for a masterful, succinct response to Trump’s disparaging comments about her appearance. However, Fiorina’s time as CEO of Hewlett-Packard has been a point of contention — so much a point of contention, in fact, that pundits are questioning why she would bring it up. With mass layoffs occurring near her debate debut, the candidate has been blamed for risky business tactics which continues to plague the company.

(Couldn't resist the GIF. Sorry.) Rubio hates the Senate, so why is he running for president? So that he can really get things done. The 44-year-old announced he will not run for reelection and will direct all his efforts to getting into the White House. Though it may seem admirable, Trump is the main one calling him out for missing votes while he’s still in office. Where Rubio stands apart is his knowledge and background in foreign policy, sounding off on both China and Russia in previous debates.

A favorite among non-interventionist Republicans, the Kentucky Senator has been unable to gain traction in his party. But that isn’t stopping him. His main adversary has been Trump, who he said would hand the election to Hillary Clinton if he decided on the third party run. “And here’s a guy [Trump] who brags about buying and selling politicians. It’s like, that is precisely what is wrong with the system,” Paul told Meet the Press. He even questioned the TV’s personality’s ability to speak with foreign leaders, saying, "Do we really want someone in charge of our nuclear arsenal who goes around basically using the insults of a junior high, or a sophomore in high school?"

Cruz has been invited to each of the three previous debates. Problem is, he isn’t getting too much facetime. But he is getting attention (and money) behind the scenes. Cruz has recently received endorsements from Texas Lt. Gov. Dan Patrick and technology pioneers Darwin and Doug Deason — who had donated $5 million to Governor Perry’s now-defunct campaign. And he’s taking this opportunity to hit Bush where it hurts. Though he didn’t acknowledge him by name, Cruz went to Texas and claimed that he has support from both millionaires and grassroot groups — something a certain someone is missing.

It may feel like you can’t escape the never-ending cycle that it politics, but it’s always comforting know more about the candidates. After all, one of them could be running the country in the near future.