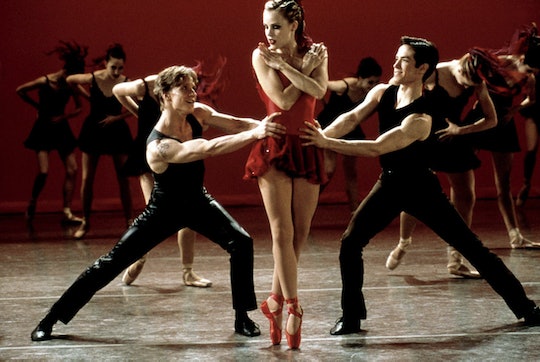 Which 'Center Stage' Alums Are Starring In 'Center Stage: Dance Camp'? Not Everyone Is Leaping Into The Spotlight Again

Okay, look. I'm a realistic person. I know that a Lifetime follow-up to Center Stage would never attract back all of the original film's talent. Must I remind you that Zoe Saldana starred as the one-and-only Eva Rodriguez (named "after no one") in the 2000 original? But, if we're going to get Center Stage: Dance Camp, a Lifetime movie sequel to Center Stage, and it's going to star Peter Gallagher, Sascha Radestsky, and Ethan Stiefel, then it's gotta come with Amanda Schull's Jody Sawyer.

But, I get it. I'm greedy. After all, we're talking about a freaking threequel to Center Stage, the finest dance movie to ever motorcycle its way into our hearts. I should be happy with its mere existence, considering Oxygen already brought us Center Stage: Turn It Up in 2008. And I am! Because it sounds every bit as awesome as a Cooper Nielson original. According to Lifetime via Mashable, Gallagher's Jonathan Reeves is told he must infuse "more contemporary styles and modernism into the American Ballet Academy," a problem that only has one solution: the titular dance camp, which will serve as a feeder for the Academy itself. Modern dance, competition, Charlie — what more could we Center Stage fans possibly want? (Oh, and did I mention the cast comes complete with real-life dancers Kenny Wormald and Chloe Lukasiak?)

But are you sure, Lifetime? Can we really not have Jody as well?

But what are Center Stage: Dance Camp's missing stars doing instead of starring in the movie? They better have a good excuse to be skipping out on this go-round.

Okay, Jody has a good excuse after all. After following up her Center Stage stardom with appearances in Pretty Little Liars and guest stints on series like Psych, Schull at last landed a couple steady TV gigs on Suits and 12 Monkeys (above). Even still, when asked what her favorite role was, Schull said "playing Jody Sawyer in Center Stage was pretty special." So come on board the special, Amanda!

That's Eric O. Jones of course, after Oprah. The Carnegie Mellon School Of Drama grad, who appeared on stage in Mamma Mia! and High School Musical On Stage! after starring in Center Stage, has slowed down a bit, his most recent credit being a dancer in 2010's The Other Guys. Other than that? It's unclear how Evans, who's social media quiet, is spending his days. Back in a 2008 interview, he detailed his exhausting touring schedule, but I feel like Eric would value a great comeback, no?

Since Maureen gave up the dancer life at the end of Center Stage, it's far from surprising that Pratt would not be appearing in the sequels. But the 10 Things I Hate About You star has been keeping busy since the 2000 ballet film, appearing in both film (The Gift) and TV (with a stint on Masters of Sex).

At the time of Center Stage's release, Kulik was probably the most famous cast member. A gold medal winner at the 1998 Nagano Olympics, Kulik parlayed his fame into exactly one movie role: Center Stage. Despite him being an absolute charm on screen, Kulik moved on from acting to focus on skating and fatherhood. The skater is married to fellow skater Ekaterina Gordeeva, whom he shares a 13-year-old daughter with. Currently, he works as a skating coach and makes Cooper proud with moves like these.

He's Pinocchio, hello Once Upon a Time fans. (Oh, and also an alum of Band of Brothers, ER, Covert Affairs, Ray Donovan, and Stalker.)