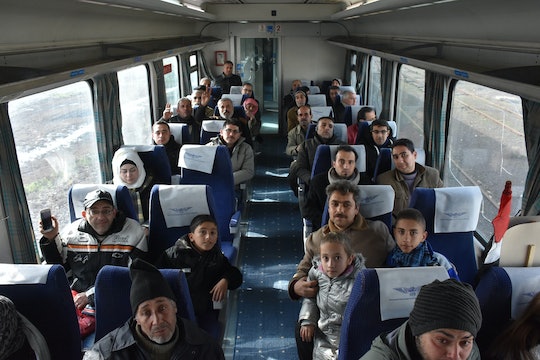 In a move that shocked absolutely no one, President Donald Trump on Wednesday signed (yet another) executive order calling for a temporary ban on refugees entering America from several countries. While Trump ran a campaign based on a lot of promises, many were hoping that he would not follow through on a majority of them, as they appeared to be harmful for scores of people. Unfortunately, Trump's first wave of executive orders (which aren't exactly as powerful as they may sound) put into action a lot of his most controversial promises. The infamous wall will now "officially" be built, Obamacare will allegedly be a goner, and now, refugees from several Muslim countries will be barred from entering the United States until further notice. The executive order, signed on Wednesday, not only puts a halt on the number of refugees allowed to enter America, but it also stops the permitting of visas for several countries as well. So, which countries are affected by Trump's immigration order?

Well, according to multiple sources, the list of countries that will be affected specifically by the suspension of visas are: Iraq, Iran, Libya, Somalia, Sudan, Syria and Yemen. You'll notice that all of these countries are majority Muslim.

While Syria is in the midst of a brutal and bloody civil war, Trump and his administration have deemed it necessary to restrict Syrians from seeking safety in the United States. Of course, Trump claims that the main reasoning behind the new executive order is to protect American citizens from any possible terrorist attacks on American soil. And while that's a nice thought, it isn't exactly a smart move policy-wise. In fact, according to a report by Reuters, "legal arguments could claim the executive orders discriminate against a particular religion, which would be unconstitutional."

In a draft of the executive order obtained by The Los Angeles Times, it appears that Trump is attempting to deny entry to the United States for refugees for a period of 120 days; After such time has passed, the policy would remain in a gray area:

So, basically, Trump's appointed secretaries will have the say-so in who will be allowed to enter the United States after the mandatory 120-day ban. While, at this point at least, not much is clear, one thing is certain: Trump's new executive order isn't kidding around, and neither is Trump.