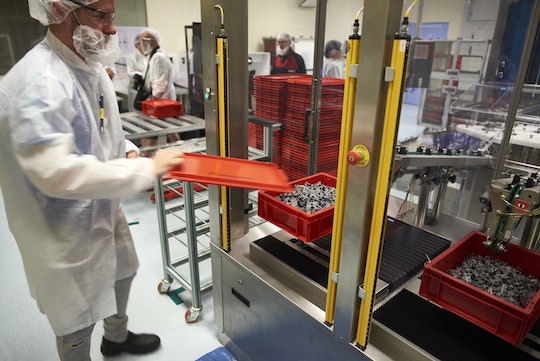 Which Country Is Most Opposed To Vaccines? Apparently France Is Leading In Skepticism

The use of vaccines continues to spark heated debates around the world. Anti-vaccination parents and vaccination advocates (many parents, scientists, and public health officials included), continually butt heads in vaccination debates. It's a serious conversation, considering the rising number of infectious disease outbreaks, like the multi-state measles spread in the United States last year. A recent study, reported by Mother Jones, captured interesting information on the varying attitudes towards vaccines around the world. So, which country is most opposed to vaccines? Apparently, France has the highest population of vaccination skeptics.

Mother Jones created a color-coordinated map that illustrates the varying perceptions towards vaccinations around the world. The map is based on a recent study published in EbioMedicine by researchers at the London School of Hygiene and Tropical Medicine and the Saw Swee Hock School of Public Health in Singapore, according to a Vox report. According to the research, 41 percent of people surveyed in France disagreed with statements that vaccines are safe.

The EbioMedicine study surveyed 66,000 people across 67 countries around the world, EurekAlert! reported. Across 67 countries, the average percentage of the population skeptical of vaccines was 12 percent. And the United States, reportedly, revealed a response close to the average, with approximately 14 percent of the surveyed population disagreeing that vaccines are safe, Vox reported. The survey consisted of responses from 1,000 people.

But Heidi Larson, the lead study author, reportedly noted that she believed a state-level analysis in the United States would yield different results.

"I'm pretty confident that if we had done a state-level analysis, we’d have seen more extremes," Larson said, according to Vox.

Bosnia & Herzegovina, Russia, and Greece, followed France's skepticism with percentages, 36, 28, 27, and 25 respectively. Alternatively, Bangladesh, Saudi Arabia, Argentina, Philippines, and Ecuador revealed the most trust in vaccine safety. On a scale based on regions, Southeast Asia, and Africa garnered results showing the most trust in vaccinations, compared to the European region which had the least.

Public health organizations like the Centers for Disease Control & Prevention, and the World Health Organization, have worked to dispute the many anti-vaccination arguments throughout the years. Supporters of the anti-vaccination movement have argued that vaccines cause harmful side effects and illnesses, in addition to links to autism, among other arguments. But the CDC and WHO have released research reports indicating that vaccines are not linked to developing autism – or other illnesses. In fact, public health organizations have continued to dispel as many anti-vaccination arguments as possible.

Clearly, the vaccination debate is a global issue. Here's to hoping more populations of parents everywhere receive and acknowledge the accurate and scientific information available.