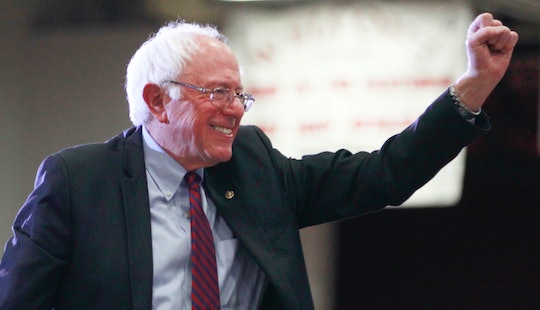 Another Tuesday, another set of important primaries. Voters headed to the polls in Idaho, Utah, and Arizona, waiting in sometimes record-breaking lines to have their say on the next Democratic presidential nominee. The night had the potential to give new life to Vermont Sen. Bernie Sanders' campaign, silencing the critics calling for him to leave the race, or to bolster former Secretary of State Hillary Clinton's lead. So which Democrat won Western Tuesday?

Although Sanders won two out of the three states, taking home the greater portion of the delegates and technically sealing the Western Tuesday victory for himself, Clinton easily swept Arizona, the biggest state of the night. This continued her trend of winning delegates, and delegates ultimately matter more than states, especially since the Democrats don't have the sorts of winner-takes-all contests that the Republicans do. The final delegate count of the night may have favored Sanders 55-51, but Clinton was able to hold onto a firm lead in the overall count, giving Sanders a short-lived celebration for the time being.

Arizona, with its 75 proportionally-awarded delegates, was the real prize going into Western Tuesday. Both Idaho, with 23 delegates, and Utah, with 33 delegates, were expected early on to go for Sanders by margins possibly as good as two-to-one. Still, all three states experienced high voter turn-out, with voters having to wait over two hours in some places to make their selection. In Maricopa County, Arizona, where the number of polling places was down to 60 from 200 in 2012, election officials had to rush extra Democratic ballots to locations that ran out.

The Clinton campaign had downplayed expectations in Idaho and Utah, with Clinton not even visiting Idaho ahead of the caucus. Instead, the Clinton campaign focused on Arizona, with Bill Clinton stumping for his wife in Phoenix over the weekend. (This was, of course, before his gaffe where he seemingly insulted President Barack Obama by referring to the "awful legacy of the last eight years," although the Clinton campaign later clarified he was referring to Republican obstructionism.) Advanced polls in the state favored Clinton, giving her a double-digit lead, but after Sanders's historic upset victory in Michigan, many political junkies learned not to get too complacent about advanced data.

Still, as Clinton campaigned in Arizona ahead of Western Tuesday, she spent more time focusing on the Republicans than on Sen. Sanders, saying, “The stakes in this election just keep getting higher and higher, and the rhetoric on the other side keeps getting lower and lower." Sanders, for his part, continued on the Clinton offensive, criticizing her on his Arizona campaign stops for her ties for corporate donors and Wall Street speeches.

Given the results of the night, don't expect that dynamic to change anytime soon. With Sanders vowing to stay in until the convention (and his stellar performance on Tuesday sealing the deal, at least for now), we've got months more to go.