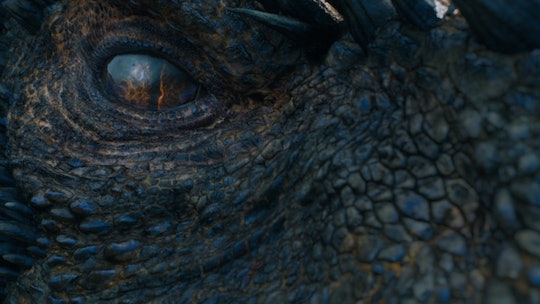 Daenerys Suffered A Terrible Loss On 'Game Of Thrones'

If viewers were devastated by seeing Drogon suffer a non-fatal spear wound from Bronn back in Episode 4, "The Spoils of War," that's nothing compared to what they'll feel after witnessing Sunday night's epic showdown in "Beyond the Wall." After unleashing her dragons on the army of the dead, the Night King fought fire with ice and hurled a massive ice spear into one of their necks, killing it almost instantly. But which dragon died on Game Of Thrones? The victim of this deadly blow was most definitely Viserion, the dragon named after Dany's brother, Viserys.

Fans have expected for quite some time that Daenerys would lose one of her precious children and Viserion always felt like the most likely target. Drogon has more or less been Dany's go-to dragon of choice to ride (named after her deceased husband, Khal Drogo), and many believe it's only a matter of time until Jon Snow rides Rhaegal, who was named after his biological father, Rhaegar (though Jon doesn't know it yet). That pretty much has left Viserion riderless and therefore (sadly) exposable. Some fans have wanted to believe that Tyrion would eventually take up that mantle by discovering that he, too, is of Targaryen decent, thus fulfilling the "dragon has three heads" prophecy. But this has yet to be proven.

And now that Viserion has been transformed into an ice dragon — after getting touched by the Night King — it's looking more and more likely that the Night King himself will become the third rider.

As for what this means for the show moving foward, well that's an entirely different story. Viserion is no longer the dragon that Dany knows and loves. Undoubtedly, morphing into an ice dragon will mean that he's now at the Night King's command, doing whatever he says. Could this mean that he'll attack his brothers? Probably. And granted, it would still be two against one, but still. The White Walkers just received some serious ammunition by getting a dragon on their side. Not to mention how much heartache it's going to cause Dany.

So make no mistake — Viserion is dead. Whatever has been resurrected inside of him is something completely different. Just like how wights are no longer the humans they once were, so goes the same for dragons (at least that's what I'm being led to believe). Either way, this was a huge victory for the undead, and even though it means Viserion's time on the show is probably far from over, it could end up being terrible news for the other Game of Thrones characters we've come to love.