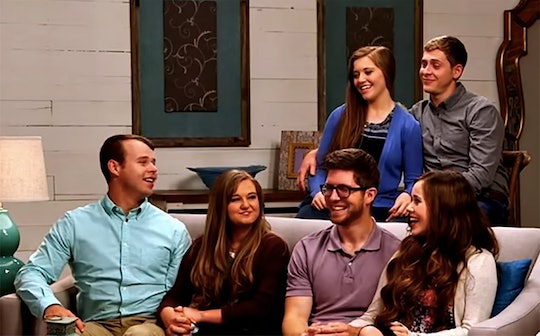 Now That Joy-Anna Duggar's Baby Is Finally Here, Which Duggar Will Give Birth Next?

In case you missed the exciting news, Kendra and Jinger Duggar are both pregnant with their first respective children. It's a busy time for the Duggars, to say the least, and for fans, it can be difficult to keep up with the long list of due dates. And if you're wondering which Duggar is due next, there's a good chance you're not alone. That being said, who will give birth in 2018? It looks like Counting On fans will have a new Duggar baby to fawn over sooner than later.

Now that Joy-Anna Duggar is no longer pregnant (she gave birth to her son, Gideon, on Friday), that leaves two Duggars with a bun in the oven. At this moment, both Kendra and Jinger are set to give birth in 2018. But who will deliver first? If you've been paying attention to the pregnancy announcements, there's a good chance Kendra will become a mom before Jinger.

Back in December, Kendra and her husband, Joe Duggar, announced their baby news in a video statement. “I’ve always dreamed of having my own family and it’s really just kind of surreal that it’s actually here,” Joe said at the time, according to People. "I kind of think it’s going to be a boy, but either way, I’m happy just to have a baby.” To which Kendra replied: “I think it could be a girl. You never know!”

And a few months later on Feb. 3, Joe and Kendra found out that they're having a boy. The couple said in a joint statement, according to Us Weekly:

Wow! We are so happy to learn that our firstborn is a boy! Our minds are already racing toward all the future memories to be made with this little guy! Most of all, we are already asking God to bless him and help us grow him into a loving and faithful follower of Christ!

Amid all of Joseph and Kendra's excitement, Jinger and her husband, Jeremy Vuolo snuck in some good news of their own. The parents-to-be said in a joint statement on Jan. 3, according to Us Weekly:

Although the couple has yet to reveal their baby's sex, Jinger's due date may have been confirmed in late January. Accidentally or not, the church where Jeremy serves as a pastor revealed Jinger's due date on their website. In Jeremy's pastor bio, it states that Jeremy and Jinger are expecting their first child in "July of 2018."

But what about Kendra? As it turns out, her due date is a bit more murky. Given the timing of the announcement, Kendra and Joseph probably conceived sometime in October 2017, which means the baby could possibly be due in June. And adding credence to this timeline is an Amazon wish list in Kendra's name that's chock full of baby supplies. While it has yet to be confirmed if Kendra is in fact the owner of this wish list, it cites her due date as June 17, 2018.

So, it looks like Kendra could give birth before Jinger *if* she is actually due in June. Until Kendra confirms the due date, however, the truth remains up in the air. The good news is that no matter how you slice it, a new Duggar baby will make its debut in less than six months.