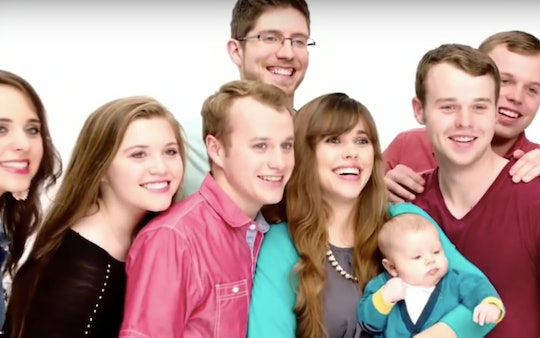 Which Duggars Are Best Friends? Some Of Their Relationships Are So Sweet

The Duggars pique the world's interest for a host of reasons, chief among them their incredible ability to seemingly raise and manage a super huge family so well. Though the family is always diplomatic when addressing the public and would never admit that anyone plays favorites, it does beg the question: Which Duggars are best friends? The siblings seem to be super close on Instagram, but if you look a little closer, you'll notice that there are some who are definitely closer than others.

In any family, it's no secret that some kids are typically better friends than others. This usually has to do with age, but also personality. It's actually not even uncommon for some children to be closer to one parent or another, and that's totally OK. Whatever works for your particular family is what's best.

Though the Duggars are universally supportive of one another, posting congratulatory photos whenever a new sibling gets married, welcomes another little one, or just stops by for a visit, upon closer inspection, it's evident that there are a few who are super close. Take, for example, Jinger and Jessa. Jinger wrote a super long birthday post for Jessa, but her other siblings didn't receive a shout out. Or Jill and Joy-Anna: Joy has said that Jill is "definitely her favorite." There's a lot to read between the lines of the grid, and it's clear that though all the siblings love each other, some may just vibe a bit more than others.

In May of last year, Jinger posted a throwback photo of herself and Jessa and wrote: "Best friends forever!" A few months later, in honor of Jessa's birthday, Jinger shared the same photo again, except this time, accompanied by a super long shout out detailing just how much she loves Jessa and how much she means to her, even signing it "your BFF."

Whether we were teaming up as little kids to color the kitchen cabinets with Sharpies or teaming up to help others as we got more mature—you have always been a faithful companion! We have made so many memories and enjoyed doing so many things together—just to name a few...my shopping buddy, fashion consultant, travel companion, hair stylist, playing piano duets together & bargain hunting! God is so kind to give me a sister such as you!

Anna Duggar has made it pretty clear that she's super close to sister-in-law Jill. In February 2015, she posted a photo of them both holding their stomachs, and said: "So fun to be pregnant at the same as Jill!" She also posted a photo of Jill right after she gave birth to Israel, telling Instagram that she and Josh went to Arkansas to be there for the birth.

Though these instances may seem just like one sister-in-law being supportive of another, it's worth noting that Anna hasn't posted anything similar for her other in laws. Their friendship may have developed because they were pregnant at the same time, but it's hard to say.

The other Duggar in-law that Anna has posted photos of is actually Joseph. In January of 2015, she snapped a selfie with him, and added: "Happy Birthday Joe!!! Thankful for a brother-in-law that loves God and serves others!"

Joy-Anna has actually confessed that Jill is her favorite. She shared this super sweet photo of them hugging, and added: "Honestly, Jill HAS to be my favorite sister." Despite this, some people speculated that they actually aren't that close after all, as InTouch reported that Joy-Anna told Jill she was expecting via text. Apparently, it wasn't enough to weaken their bond.

Anna Duggar posted a photo of her daughter MacKynzie with Josie and Jordyn Duggar, who are, technically, her aunts. As hard as that is to believe, it's clear that given how close they are in age (and this very cute group hug) that the three love each other's company.

Jessa fulfilled her big sister duties by taking Jordyn out to Chic-fil-A dressed up as a cow to get free chicken. (It was part of a promotion the chain was running). Jessa hasn't posted many other photos with her younger siblings, but it's clear that she and Jordyn have a special bond. She wrote on the photo:

Dressed up for free chicken! Jordyn is the cutest little cow in town!

Jessa has made it clear that another sibling she's super close to is Joy-Anna. On her birthday, she posted a photo of her with Jordyn and Josie, and wrote:

Happy birthday, Joy Joy! Love you so much, and I'm so blessed to have you as my sister! You light up the world around you and bring love and joy everyone you meet! Praying God's blessings over you in this new year!

She even followed it up with a silly video of Joy and the younger girls recording a DubSmash video.

Though everyone knows that all of the Duggar siblings and in-laws love each other unconditionally, it's totally normal for some sibs to be closer than others... it's just one more thing that makes this family of 19-plus pretty relatable after all.