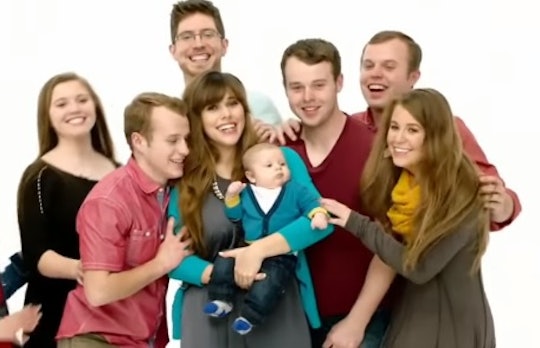 Which Duggars Are Democrats? Not All Of Them Are Ultra Conservative

As you might be aware, there are 19 kids in the Duggar family of Counting On fame. That means there are 19 different individuals, with possibly different opinions or points of view, even if their family is generally known to be pretty conservative and hasn't made a secret of their more strict evangelical religious beliefs. And a lot of those Duggar children are also married, and their spouses have their own opinions and viewpoints as well. That would imply that there could be Duggars and Duggar family members who align with different political parties. But which Duggars are Democrats? Or, which are Republicans, or maybe aren't registered with any particular political party at all? As it turns out, there might be at least one rebel among the Duggars' otherwise conservative brand.

The Duggar family previously supported President Donald Trump in the 2016 election, according to In Touch Weekly. In the past, the family has attended the Values Voter Summit, which works to "preserve the bedrock values of traditional marriage, religious liberty, sanctity of life and limited government," which are generally conservative political issues. Jim Bob and Michelle Duggar — parents of the kids from TLC's 19 Kids & Counting — even spoke at the Values Voter event in 2014.

But what about the rest of the Duggars? Were they all aboard the "Trump Train," or if they were, have any of them jumped off? You might be surprised to hear that not everyone in the Duggar family camp is as enthused about Trump and all of his policies are you might think.

Fans may know that Jim Bob ran for the Republican nomination for U.S. Senate against the incumbent, Sen. Tim Hutchinson, in Arkansas in 2002, according to BuzzFeed. And the family once made a video in support of Rick Santorum when he ran for president, as seen above. So we know that they're politically engaged and have been involved in politics even on the local level. But have any of them declared officially that align with the Democratic Party?

Derick Dillard, the husband of Jill Duggar Dillard, once said he was voting for Donald Trump, and said he was more in support of his "policies" than Hillary Clinton's, according to Us Weekly. So while he hasn't outright said he's not registered as a Democrat, it's probably safe to count him out as one. Jill, on the other hand, posted about the importance of voting, but didn't say which candidate she voted for in the most recent presidential election, and hasn't posted in support of Democratic candidates in the past.

However, the other Duggar husbands may feel differently than Derick. In August 2017, Ben Seewald — husband to Jessa Duggar Seewald — tweeted the following in response to another tweet:

I voted--Just not for Trump or Hillary. I'm just saying I don't choose to identify myself with either of those parties first and foremost.

Which seems to imply that he's not registered with either the Republican or the Democratic parties. So unless he's changed his mind since then, he's probably not a Democrat either. And he's actually been critical of Trump at other times too, according to SheKnows.

Basically, none of the Duggars have expressed that they are currently a part of the Democratic Party or are interested in being a part of it. Jim Bob and Michelle seem pretty staunchly conservative, and likely haven't changed party registrations since Jim Bob ran for office. Some of the Duggar husbands have been more vocal about their politics than others, but none of them have espoused Democratic party beliefs or strong support of the party itself either, and neither have their wives.

But who knows? Maybe some of the Duggar girls secretly cast their vote for Clinton, or quietly changed their party to Democrat at some point. But unless they publicly declare that, we'll never really know.