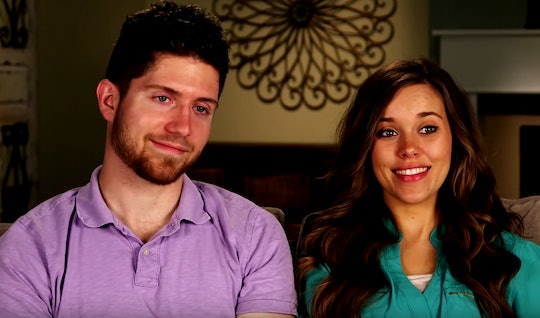 Is it just me, or does it seem like there's a Duggar baby announcement every time I turn around? To be fair, their reality TV show on TLC isn't called Counting On for nothing. However, now that so many of Michelle and Jim Bob's children are grown up, married, and starting families of their own, it can be difficult to keep up with who is currently expecting. So which Duggars are pregnant right now?

Fans of Counting On are already familiar with the typical Duggar timeline. The process begins when a young adult enters into a courtship — during which they must be surpervised by chaperones at all times and have little physical contact, except for side hugs of course. After a few months of getting to know one another with the goal of marriage in mind, the couple almost always becomes engaged. (At which point, hand holding and "I love you" becomes acceptable.) The families then go into full-on wedding-planning frenzy mode. A few months later the happy couple exchanges vows and then usually starts a family soon afterwards. With a few exceptions — Jinger and John David, to name a couple — this is how it's played out for the Duggars through the years.

As you can imagine, this means there's almost always another Duggar on the way. So let's take a look at all of Michelle and Jim Bob's children who currently have a bun in the oven, shall we?

“We are overjoyed that God has blessed us with a baby, due late this Spring!” Jessa told the publication. “From the day we found out we were expecting, we both guessed boy, and if our predictions are right then we already have a ton the clothing and accessories ready to pass down! At the same time, we would absolutely love it if we found out we were having a girl — though we’ve joked that we’d be starting from square one and might have to learn a few things.”

Most recently, Joesph and Kendra Duggar announced they're expecting their second child, according to Us Weekly. They welcomed their first child, a son named Garrett, in June 2018.

“We are ready to double the fun at our house!” Joe and Kendra told Us Weekly on April 11. “Being parents has already proven to be a greater joy than we had hoped or imagined. We love getting to parent together and are loving every moment and milestone. We are very happy that our little family will welcome a new addition later this year. Children really are a blessing from God!”

It's worth mentioning that Josiah and Lauren Duggar recently revealed they had suffered a miscarriage. Just weeks after learning they were expecting their first child, Lauren sadly miscarried, according to E! News.

"I wasn't feeling well — I was cramping really, really bad, which was quite strange because I normally don't," she explained in a TLC clip ahead of the Season 4 premiere, according to E! News. "I was thinking I had something with gluten in it... It was late at night and I went to the restroom, and right there was the baby. Gone. I couldn't believe it, and I was hoping it wasn't true."

Aside from Jessa Seewald and Kendra Duggar, no one else in the family is currently expecting — that fans know of, that is. But there are still plenty of future prospects. John David and Abbie Duggar are the most recent couple to have walked down the aisle. So there could be a pregnancy announcement coming from them in the near future. Then again, it's been a while since Jill and Derick Dillard have added a little one to their family. (They have two sons, Israel, 4, and Samuel, who turns 2 in July.). And there's always Joy-Anna and Austin Forsyth, who had a son named Gideon in February 2018. Not to mention Josh and Anna Duggar, or Jinger and Jeremy Vuolo, who welcomed their daughter Felicity in July 2018.

One thing's for sure: Considering they have a TV series called Counting On, another pregnancy is never far away for the Duggars.