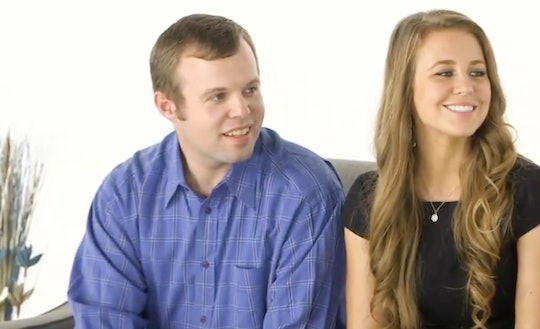 When people first heard about the Duggar family's impressive number of children, many were probably quick to jump to conclusions: "Nineteen kids? Wow! I can't imagine being pregnant 19 times." Except, here's a fun fact: While Michelle Duggar has indeed been pregnant 19 times, two of those pregnancies actually ended in miscarriage — and two of the other pregnancies were sets of twins. If you do the math, the Duggar matriarch has technically been pregnant a whopping 21 times. (Not that that's any easier to fathom.) But which Duggars are twins? Because it might not be who you think.

If you haven't managed to memorize the birth order of the Duggar children — which was rattled off in quick succession during the days of 19 Kids & Counting — then I don't really blame you. All of their names start with "J," they're so close together in age, plus after a while, they all start looking the same.

But, let's do a run-down, shall we? There's: Josh, Jana, John David, Jill, Jessa, Jinger, Joseph, Josiah, Joy Anna, Jedidiah, Jeremiah, Jason, James, Justin, Jackson, Johannah, Jennifer, Jordyn and Josie. Whew! Honestly, I'm not sure how Michelle and Jim Bob ever called any of them by the correct names. So which siblings are twins?

Michelle explained how different her boy/girl set of twins have been since the beginning, in response to a fan question she answered on TLC's website. "Jana and John, of course being boy and girl, had a lot of differences in that respect, but their personalities were so different, too," Michelle wrote. "One was so laid back and the other one was so energetic and into everything. John David just watched Jana because she had enough energy for both of them." She continued:

Jana took off walking at eight months. John David waited until the average age of twelve months like the rest of my kids. John was a bigger baby when he was born; Jana was smaller, so I think she was more agile and able to get around.

These days, John David seems to dabble in a little bit of everything — from his work in construction, to police work, to getting his pilot's license, according to a birthday update from the Duggar Family Official Facebook page. In a TLC interview, John David spoke about what he hopes for the future. "Future plans would be to, I think, one day, you know, the right one [would] come along and I'd start a family and hopefully be able to invest in their lives and raise up a generation that will be great people for this society," he told TLC. "And invest and be a good solid family."

As for Jana? The same Facebook update noted that she is a concert pianist and is "involved in many ministries." According to In Touch Weekly, many critics of the family have given Jana the nickname "Cinderella Duggar," since she's the eldest daughter who still lives at home and helps take care of her younger siblings. Although several of their younger siblings have already walked down the aisle and started families, neither Jana nor John David have publicly announced a courtship. However, according to In Touch Weekly, there is speculation that John David is already in a courtship and that it will be announced during the next season of Counting On.

Michelle and Jim Bob's second set of twins is probably a little easier to guess, just because of how similar their names are: Jedidiah and Jeremiah. The boys — number 10 and 11 in the Duggar line-up — were born on Dec. 30, 1998, according to E! News, and they will turn 19 later this month. In the same TLC interview from 2014, Michelle touched on how Jed and Jer's distinct personalities as well. "They're the same as Jana and John David [in] that their personalities are almost opposite," she said, according to TLC. "One took off fast, and the other one was more steady and slow. Now they're fifteen and they do things together all the time because they're both boys. They have the same interests and they're really close. Jed and Jer are constantly doing things together. They're almost opposites in personality though."

As fans have pointed out on Reddit, for whatever reason TLC doesn't show or talk about Jedidiah or Jeremiah much in Counting On. We'll see if that changes once they start courting.