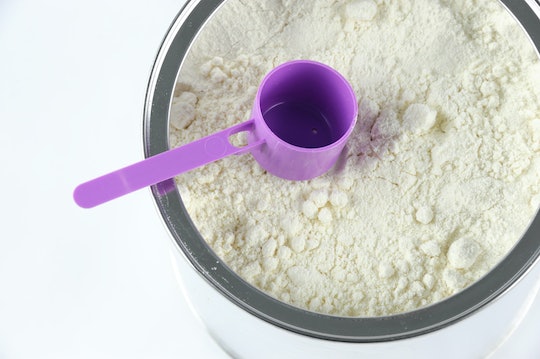 Which Formula Is Best For Your Baby?

There are aisles of the stuff — liquid, powder, pre-bottled, pre-mixed, pre-chewed, pre-spat up, pre-pooped. If you're thinking of an impossible formula for formula, it probably exists. Which is great; everyone loves choices. But which formula is best for your baby? Does one reign supreme? What is the Khaleesi of baby formula, because as the mother of dragons, she knows.

(Incidentally, if someone starts a breast versus bottle war with you, just think to yourself, "what would Daenerys Targaryen do?" or "WWDTD?" Because the answer is always awesome.)

When in doubt, always ask your pediatrician for advice and do some research with The American Academy of Pediatrics (AAP). The AAP did not go into the nitty gritty on powder versus liquid or pre-prepared, but instead focused on the digestive aspects of the formulas and the nutrition present in each formula when comparing choices. The AAP were chiefly concerned that children should receive adequate nutrition and calories from the formula, whether or not you prepare it or it's already prepared.

The AAP also noted that for most kids, cow's milk formulas with iron and vitamin D added are the standard formulas recommended, as 80 percent of children have no problem tolerating it, and it's the most readily available. However, the AAP mentioned that how you feed your children is a personal choice, and if your family is vegan, or you just don't do cow's milk, you can safely feed your child soy formula, you just might need to supplement with vitamins. In another article, the AAP noted, "Multiple experts have concluded independently that vegan diets can be followed safely by infants and children without compromise of nutrition or growth and with some notable health benefits."

According to the Mayo Clinic, some babies have health issues that preclude them from drinking typical formulas, milk or soy, and they might need something called hydrolyzed or "pre-digested" (I wasn't kidding) formula — it has smaller proteins and is easier on sensitive tummies. There is also the super-hydrolyzed formulas for very sensitive babies which can be upwards of $200 per month. However, some insurance companies (including mine) cover at least part of the cost, and WIC also covers it, but they require extensive documentation that you have to fill out with your pediatrician.

OK, so you've decided you are going for the traditional modified moo juice. How do you choose which one? Check your budget. Judging by current prices on Amazon and Target, premixed formula costs two to three times more than powdered formula. Liquid concentrate is hard to find, but costs about 50 percent more than powdered while organic powder is about 50 percent more expensive than conventional. And organic premixed formula? It ranges from three times the cost of conventional powdered formula to "we'll just take your first born once you burp them, thanks." Also, premixed formulas have a very short shelf life once opened, which can lead to waste.

What about store brands? US News & World Report suggested going for the brand names. The article cited that when it comes to feeding your baby, a bargain isn't your best bet, and that the big brands have the most extensively-researched products.

What about all those added fats and vitamins? Which formula is best for baby in that instance? The website for Dr. Sears recommended that you look for a formula that adds DHA fat to the formula. This fat is crucial in brain development, but the ARA fats will naturally metabolize in baby's body.

When you are choosing which formula is best for baby, it's all about the four Bs — baby and what they like, brain to get those DHAs, belly for what baby can tolerate, and budget so you know what you can afford. Talk it over with your pediatrician, and maybe get a few samples from the manufacturers, (if they haven't sent them to you, write them — they often will) and do a little testing of your own. It's important that you are comfortable and happy with your choice, and do what's best for your baby.

More Like This
Abbot's Formula-Producing Plant Can Reopen In As Early As 2 Weeks — Now What?
Here’s What You Need To Know About That Viral 1960s Baby Formula “Recipe”
Can You Help Your Baby’s Hair Grow?
Grace Farris Wants to Talk About Her Air Fryer