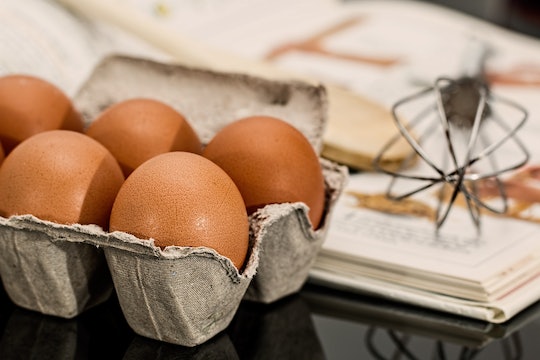 Which Good Earth Eggs Have Been Recalled? It's Tricky To Find Out

After a salmonella outbreak in Kansas, Missouri, and Illinois, the Good Earth Egg Company issued a voluntary recall of its eggs earlier this week, according to CBS News. The recall was issued after eight people across the three states were tested positive for a strain of salmonella. Two of the eight people have been hospitalized. The infection was traced back to the eggs, which the Centers for Disease Control and Prevention officials are now saying should be pulled from shelves and discarded. But how can you tell which Good Earth eggs fall under the recall? That's where it gets tricky.

The company's shell eggs are sold under a variety of brand names, so it might not be obvious by the packaging whether the eggs are affected by the recall. But there are ways to find out for sure if you could be at risk of consuming the recalled eggs.

Firstly, the company only distributes in the Midwest, so eggs outside of the region are not affected. The eggs were packaged in cartons of varying sizes: 6-count, 10-count, 12-count, 18-count, 15 dozen, and 30 dozen, according to Food Safety News.

Labels on the packaging will also help determine whether the eggs are affected. The packages should have a label that reads "Packed for" or "Produced for Good Earth Egg Company." Sell-by dates on affected packages will be Oct. 8, 2016, and everything before. There is also a date code on the package, and affected eggs will have a code that is 252 or under.

Good Earth eggs were sold at Dierbergs, Straubs, Midtowne Market, Price Chopper, and other stores in Missouri, and may have been sent to restaurants, wholesalers, and retailers across the Midwest.

Good Earth Egg Company has released the following statement, according to the Food and Drug Administration:

We are taking these steps because consumer safety is our top priority... Although no Good Earth Egg Company eggs have tested positive for Salmonella, we feel strongly that issuing a voluntary recall is the right thing to do. Good Earth Egg Company is working closely with the FDA to determine the root cause of the potential contamination.

This isn't the first time Good Earth has issued a voluntary recall, according to Food Safety News. A similar, but larger, salmonella outbreak was traced to Good Earth in December 2015 and January 2016. It involved at least 52 people in six states.

By comparison, this recall has affected few people. But it's still a good idea to be safe and take measures to prevent the spread of salmonella. The CDC has recommended that consumers not return the product to the store where it was purchased, and instead just discard the product and its container. It also suggested that consumers clean the area where the eggs were stored.

The family-owned egg company will work directly with each customer to manage replacement of its product. Concerned customers with questions can contact Good Earth Egg Company at goodeartheggco@hotmail.com.