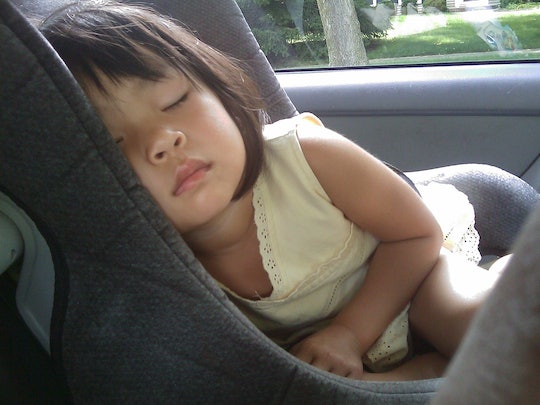 Which Graco Car Seats Have Been Recalled?

One of the most crucial products used to keep your kids safe might not be so safe after all. Eight models of Graco car seats have been recalled, all from the My Ride 65 line of convertible seats, according to Tampa Bay's ABC affiliate. In a statement to Romper, a representative for Graco said, "Over the past 60 years, safety has been and will continue to be our priority at Graco." Models 1871689, 1908152, 1813074, 1872691, 1853478, 1877535, 1813015, and 1794334, which were manufactured between May and August 2014, may have defective restraint straps that could break during a crash. Not all car seats with the listed model numbers and date ranges are affected by the recall; only those bearing a webbing tag code of "2014/06." To check your car seat, check the tag sewn onto the straps on the back of the seat (Graco has photos and instructions on its website).

According to the National Highway Traffic Safety Administration, the faulty seat belts were first discovered during a routine test in January 2015. The NHTSA notified the manufacturer in March 2016, but Graco was unable to replicate the results. After the NHTSA conducted a follow-up test in April 2017 during which one other seat belt broke, Graco identified a single batch of seat belts associated with the failed tests, and initiated the recall. The company is offering free replacement kits, but stated that "consumers may continue to use the My Ride 65 convertible car seats" until the kits are obtained.

Convertible car seats, which can be used in either a rear-facing or forward-facing position, rose in popularity after a 2011 American Academy of Pediatrics policy statement advised parents to keep children in a rear-facing seat until age two. The previous policy allowed for children to face forward once they'd reached 12 months and 20 pounds, and many rear-facing seats weren't designed for older babies, causing parents to worry that toddlers might be uncomfortable with the lack of leg room. Convertible seats enabled parents to use the same seat throughout infancy and early childhood in a variety of configurations.

Over 25,000 My Ride 65 car seats have been affected by the recall, but to date, no injuries have been reported as a result of the defective seat belts. Graco ranks among the best-selling convertible car seat manufacturers, and its Contender 65 model earned a top rating from Consumer Reports. Consumers who have questions about the recall can contact Graco at 800-345-4109, or the NHTSA Vehicle Safety Hotline at 888-327-4236.