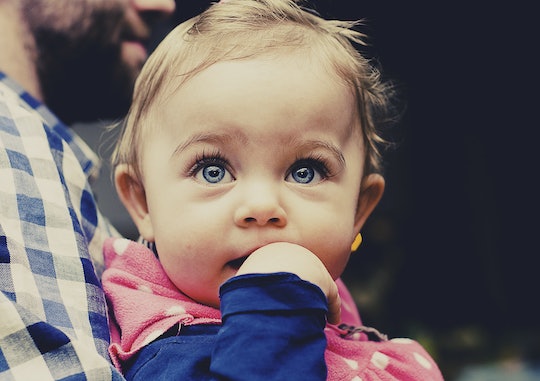 These Homeopathic Teething Tablets Were Recalled

On Thursday, the Food and Drug Administration issued a recall for a popular brand of homeopathic teething tablets — but since the product has already been the subject of FDA scrutiny before, consumers might be confused as to exactly which homeopathic teething tablets were recalled. The tablets in question are Hyland's Baby Teething Tablets and Hyland’s Baby Nighttime Teething Tablets, both of which were found to have inconsistent amounts of belladonna alkaloids when tested by the FDA. Hyland's did not immediately respond to Romper's additional request for comment.

The FDA first warned consumers about Hyland's teething tablets back in January, but according to CNN, the company refused to conduct a recall of the products since it had discontinued the sale of them back in October 2016. Hyland's now decided to issue a recall of all lots of the teething tablets, asking retailers to pull any remaining products from shelves and customers to discard them.

"FDA has formally asked us to recall the product and we are responding to that request," Hyland's wrote on its website about the recall. The company also asked customers to throw out the teething tablets. "No other information has changed and no additional data has been made available."

According to the Food and Drug Administration, there's no known safe dose of belladonna — a toxic substance also known as deadly nightshade — for children.

"The body’s response to belladonna in children under two years of age is unpredictable and puts them at unnecessary risk," Janet Woodcock, director of the FDA’s Center for Drug Evaluation and Research, said in a statement in January. "We recommend that parents and caregivers not give these homeopathic teething tablets to children and seek advice from their health care professional for safe alternatives."

Even after issuing the recall, Hyland's maintained that its product met its own "safety limit tests" and that all tested tablets fell "well within an established safety threshold," according to a press release.

Parents who have been using Hyland's or other homeopathic teething tablets should throw out the tablets and look for products that don't contain belladonna. If necessary, speak to your doctor about a suitable, safe alternative for your little one.