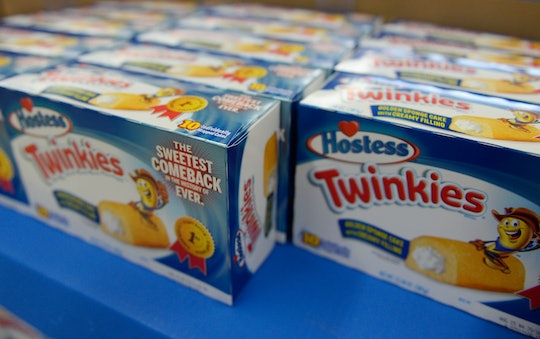 Which Hostess Twinkies Have Been Recalled?

Ah, the Twinkie: The one junk food that survived bankruptcy and could probably outlast the apocalypse — is there a more marvelous specimen of sugar, shortening, and whatever ingredients make up that wondrous white filling? Turns out, even Twinkies aren't as invincible as you might think. On Tuesday, Hostess Brands issued a voluntary recall of a selection of its fluffy comfort foods. Which Hostess Twinkies have been recalled? Fret not — your staple, regular ol' plain Twinkies are unaffected. Only the fancy Holiday White Peppermint Hostess Twinkies were recalled, which were a limited edition for the holidays.

The voluntary recall comes after another recall by the Blommer Chocolate Company, the company that manufactures the "confectionary coating" on the limited edition holiday Twinkies; Blommer's recall is the result of yet another recall made by Valley Milk Products, LLC over a concern that the milk powder produced by Valley Milk could have been contaminated with salmonella. It's like a food recall inception BWWAAAAAM! No, but seriously — salmonella can make you sick and even kill you. If you have a box of the Holiday White Peppermint Hostess Twinkies — boxes with UPC 888109111571, sold only in boxes of nine individually-wrapped cakes — the company advises consumers to stop eating them and take them back to the store from where you bought them for a full refund.

The recall alert made it clear that no illnesses have been reported and that, of the Twinkies tested for salmonella, none came back positive for contamination. The original milk powder salmonella contamination recall that began at Valley Foods has also affected Palmer Candy Company, who sold snacks foods at Walmart, Publix, and other retailers throughout the United States. Palmer Candy Company has also issued a voluntary recall of those products and a full list of recalled food items can be found at the Food and Drug Administration website. The Palmer recall also noted that no samples of the affected products have come back positive for salmonella contamination, and, like Hostess Brands, it's issuing the recall out of an abundance of caution.

With Hostess Brands' voluntary recall of its holiday Twinkies, this now marks the sixth recall, market withdrawal, or safety alert put out by the Food and Drug Administration. That's a food alert for more than half of the days of 2017 so far. It looks as though 2017 just might be shaping up to be just like last year's Year Of The Never-ending Food Recalls.