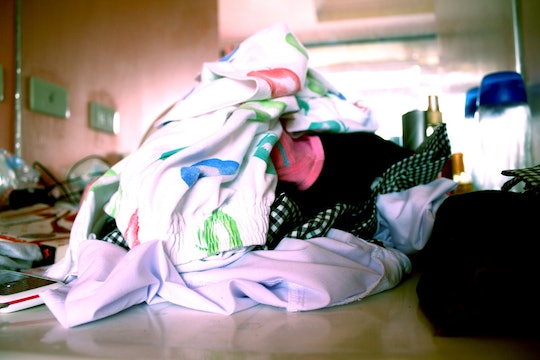 Which Laundry Packets Can Harm Toddlers? More Evidence Shows The Risk They Pose To Kids

The brightly-colored detergent packets that aim to make your laundry day a little more convenient may not be worth it if you have young children in the house. According to a study published in Pediatrics, in 2013 and 2014, 60 percent of the accidental exposures (when kids got it on their skin or in their eyes or throat) to detergent in children 6 and under involved detergent packets. Despite that report, those products have continued to result in an increasing number of calls to the United States Poison Control Center (PCC). So, which laundry packets can harm toddlers?

In short, all of them. According to the study, "it is not clear that the pod containers of any brand currently on the market are truly child resistant," nor is it clear if one is more dangerous than another. Every detergent packet, no matter the brand are scented and contained in a thin, clear, dissolvable membrane, according to the study. There have been concerns about that design since 2012, when cases of child poisonings started to become more frequent. What usually happens in these cases is kids will bite or break the thin membrane of the packet and the concentrated detergent will get into their eyes or down their throats.

According to USA Today, children exposed to laundry packets tend to have worse symptoms than those poisoned by traditional laundry detergent. Why the packets have much worse health effects isn't quite known, but experts suspect it has to do with the more concentrated detergent formula and its toxicity levels, as well as the packets' attractive color, shape, and scent. Children who are exposed often cough or vomit, and more serious cases of exposure can result in seizures, comas, ocular damage, and breathing issues. According to Consumer Reports, two children have died.

Dan DiClerico, senior editor for Consumer Reports, advised parents to avoid the product altogether. He told USA Today, "We are taking a pretty strong stance. We are saying, 'Use a different laundry detergent.'"

The American Association of Poison Control Centers recorded 10,877 calls from parents whose children had been exposed to detergent in 2013. In 2014, they logged 11,714 calls, and DiClerico said, "the trend is only going up."

Parents and researchers have asked industry leaders to change the product to make it less accessible and enticing to children. They've suggested individually wrapping each packet and placing them in a child-proof container. Tide has recently introduced new packaging with a child safety feature, along with the slogan, "Up, Closed, & Safe," but little change has been made to the pod itself. The best course of action is to keep all detergent far out of reach of small children and call the poison control center immediately at 1-800-222-1222 if your child comes in contact with it.