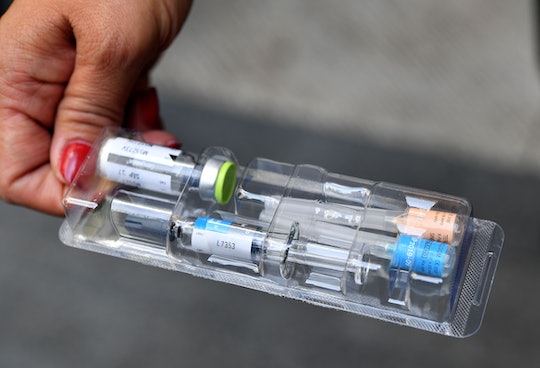 Which Places Have Banned Unvaccinated Students? Baltimore Is Part Of A Growing Trend

What would have otherwise been a typical Monday became extraordinary for students in the Baltimore City Public Schools in Maryland this week, as parents were informed that unvaccinated students would be removed from classrooms. The hardline stance from city health and education officials has come on the heels of other nationwide efforts to boost vaccination rates. But what other locations have banned unvaccinated students? Baltimore is the most recent example of a growing trend.

The Baltimore City district is the latest public school district in Maryland to enforce strict vaccination adherence rules, according to The Baltimore Sun. Just last week, neighboring Baltimore County enforced a similar deadline, resulting in 600 students barred from school due to failure to receive vaccines. Officials estimated that about 5,000 students in Baltimore City had "out of compliance" vaccination records at the beginning of last week, but the number dropped to 3,800 by mid-week in anticipation of the rule's enforcement, according to The Sun.

School officials are specifically concerned about students in kindergarten, first, second, and seventh through ninth grades, with highest levels of non-compliance found amongst kindergarteners, seventh graders, and ninth graders. Of particular concern is compliance with the Varicella vaccine — which protects against chicken pox — among the younger kids, and the Tdap and Meningococcal vaccines among the older age set.

The district-by-district push for vaccination compliance is in accordance with a Maryland law that requires students to have compliant vaccination records by the 20th day of the school year. According to ABC News in Baltimore, students can receive free vaccinations at 17 schools in the Baltimore City district, in addition to clinics typically available at CVS, Walgreens, Rite Aid, and other pharmacies.

Nationally, there has been an ongoing push for vaccination compliance that gained momentum after a 2014 measles outbreak that was traced to a single sick person at the Disneyland theme park in Anaheim, California. A widely-read study about the outbreak published in the journal JAMA Pediatrics concluded that the "vaccination rate among people who were exposed to the measles during the outbreak was no higher than 86%, and it might have been as low as 50%," as reported in The Los Angeles Times. The obvious implication was that the proportion of parents declining to get their kids the measles, mumps and rubella (MMR) vaccine was surprisingly low.

That measles outbreak was declared over by April 2015, but its impact on the national psyche lingered. In July 2016, a new California law went into effect. The law, called SB 277, requires that students enrolled in "public or private daycare, preschool, elementary school, junior high, or high school" receive all doses of 10 required vaccines, regardless of whether their parents have religious or philosophical objections to vaccinations, according to the Immunity Education Group. Such "personal belief" objections were previously allowed under California law. Parents who refuse to vaccinate their children must now home school them instead.

Like California and Baltimore, New York City has enacted policy changes in an attempt to increase vaccination rates. A new rule allows New York City public schools to bar unvaccinated students from attending school during an outbreak of vaccine-preventable disease, according to Harvard Law's Bill of Health blog. The New York rule specifies that even parents who claim a "personal belief" objection, which is allowed under New York state law, must keep their kids home from school during about outbreak. Currently, 19 states have personal belief exemptions that allow parents to evade vaccination requirements.

As for Baltimore, this week's crackdown has been part of a years-long coordination between health and education officials. "This may seem like a sprint, but it's really a marathon," Sean Naron, a spokesman for Baltimore's health department, told The Sun.

This week's deadline marks the end of the 20-day grace period that parents are given after being informed on the first day of the school year that their child's records aren't up-to-date. On that first day of the year, unvaccinated kids are removed from class and told to sit in "a cafeteria, media center or health room while their parents are called," according to The Sun.

Given the public humiliation of being removed from a classroom, it's safe to hypothesize that increases in vaccination rates may be due, at least in part, to kids complaining to their parents about sitting in "detention" all day.