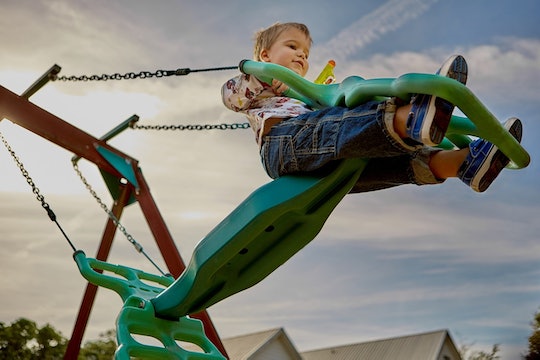 Which Playground Toys Cause Most Concussions? Researchers Say Injuries Are On The Rise

When parents think of protecting kids from concussions, most would probably worry about sports injuries. But, while more attention has been paid in recent years to the possibility of injury on the football field, more kids than ever are getting traumatic brain injuries in their backyards, in parks, and at school, according to new government research. In a study published this month in Pediatrics, researchers from the Centers for Disease Control and Prevention said that concussions from playground equipment are on the rise among kids age 14 and younger. That's scary news for any parent, but the playground toys that cause most concussions and brain injuries are even worse news. It turns out the two biggest culprits are favorites for many kids.

Researchers said that the rising rate of playground concussions could be explained by more children actually using play equipment, but could also be the result of more parents understanding the risk that brain injuries pose and becoming more likely to seek medical attention after a playground injury, according to the AP report.

According to the CDC website, a concussion is a type of traumatic brain injury caused by a blow or bump that causes the brain to bounce — or even twist — within the skull. And while most concussions aren’t life threatening, the CDC noted online that any traumatic brain injury can have quite severe consequences. Repeated concussions have been linked with brain damage in retired NFL players and professional boxers.

So while parents should certainly be concerned about the potential dangers that unsafe playgrounds can pose, according to the AP report, the study authors said that most children recover completely, experiencing only mild discomforts lasting from a few hours to a few days.

According to the AP report, the researchers said that, while an estimated 30,000 kids could wind up with playground-related concussions this year, most kids would be injured on monkey bars or swings. Again, it isn't clear whether those two were high on the danger list because they are more dangerous or because they're high on most kids' list of favorites — making them targets for more playground traffic, and therefore more injury.

But it's not all bad news for parents. Despite the dangers, it's still pretty easy to prevent kids from coming to harm, according to the study authors. Their advice: steer young kids toward areas specifically for their developmental and physical abilities — and keep older kids out of those areas. The authors also said that picking playgrounds with age-appropriate equipment — complete with a sand or wood chip ground surface, rather than concrete — is a good step toward ensuring safety. And while parents might be tempted to have their kids wear helmets on the playground, child safety website More4kids.com said that might do more harm than good, since buckles and straps can get caught or tangled on equipment.

But, accidents can and will happen. So, the researchers’ best advice for parents looking to prevent playground concussions is to provide adequate adult supervision at all times. Having parents watch for faulty equipment and dangerous play can go a long way. And it’s the best way of ensuring that parents can react quickly when an accident does happen.