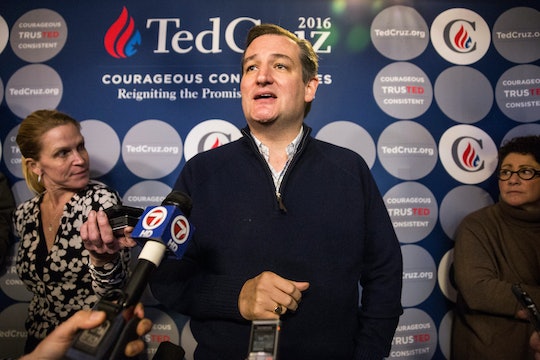 Which Republican Will Win New Hampshire? Polls Are All Over The Place

Just a week after the Iowa caucus — the first major voting event of the 2016 election — candidates headed to New Hampshire to prepare for the New Hampshire primary. Texas Sen. Ted Cruz won Iowa just a few percentage points ahead of business mogul Donald Trump, and Florida Sen. Marco Rubio finished in third. Trump, though, is polling in first place in New Hampshire, so it's not entirely clear which Republican will win the New Hampshire primary. But, if history is any indicator, Trump's chances might not be as good as he thinks they are.

Apparently Trump still holds a double-digit lead in New Hampshire, according to a NBC/Wall Street Journal/Marist survey taken after the caucus on Monday. Trump leads with 30 percent support, and Rubio and Cruz were relatively tied (or trading back second and third place) with 17 percent support each, according to USA Today. Ohio Gov. John Kasich followed with 10 percent support, then former Florida Gov. Jeb Bush had 9 percent, and New Jersey Gov. Chris Christie had 4 percent support, according to the poll. CNN reported that the polls and support could be majorly affected by former Massachusetts Gov. Mitt Romney.

Romney has been stewing on an endorsement for months, but he told friends and GOP members recently that, though he'd be glad to share stories and advice from his time as a presidential candidate, it was still too early for him to formally endorse a candidate, according to CNN.

Those close to Romney said that, if he did decide to give his endorsement early, it would almost certainly go to Rubio. It definitely would not go to Trump, Romney associates told CNN. Romney reportedly thinks that if Trump loses New Hampshire, his campaign would collapse. Since the Iowa caucuses, Trump's lead has dropped in New Hampshire by 11 percentage points, according to CNN. That's not good news for Trump. Especially since he had an five to seven point lead on Cruz in the Iowa polls before votes, according to USA Today.

What does this mean? Sure, Trump might be loud and sound good in theory to many Republican voters (which is frightening enough), but Republicans probably won't vote for him when it comes down to the wire. It will be more clear cut whether he's actually the frontrunner (and if his early success actually means people will vote for him) when people cast their votes Tuesday night.

Still, a research project called PredictWise, which is led by an economist at Microsoft research in New York City, said that Trump has a 68 percent chance of winning the New Hampshire primary. The estimate was at 77 percent before the Iowa caucus. PredictWise successfully predicted 21 of the first 26 primaries in 2012, according to Bloomberg. It's unclear just how that should be taken, but it's worth knowing. The outcome of New Hampshire, like Iowa, can't quite be nailed down.