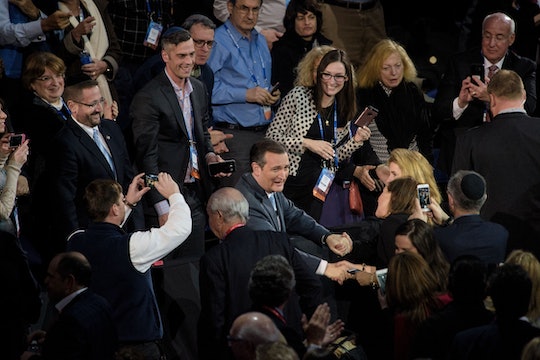 Which Republican Won Western Tuesday? It Might Not Matter

When it comes to modern presidential elections, every Tuesday after the Iowa caucuses is important, so much so that cable news now christens each subsequent Tuesday with a given name. This week was given the title of "Western Tuesday", likely to give voters a reason to tune into coverage than anything else, since there are only a couple of states that are actually voting. So does it matter which Republican won Western Tuesday?

Not really, as it turns out. Tuesday this week saw just Arizona, Utah, and the American Samoas hold their respective primaries, while Idaho and Utah also held a pair of Democratic caucuses. But even though the victory was arguably split between front-runner Donald Trump and Texas Sen. Ted Cruz, it doesn't mean either party has much to brag about later on down the line.

Why is that? Here's the basic gist: Arizona, for example, counts for a mere 58 delegates. Utah and American Samoa bring in just 40 and 9 respectively for the Republican candidates, according to statistical analysis site FiveThirtyEight. Basically, that means that while Trump may have been the evening's technical winner... in the grand scheme of things, it probably didn't count for much.

Early in the evening, most news outlets called the state of Arizona for Trump, and a sweep in Utah sealed Cruz's victory there, as the senator began racking up a whopping 50 percentage points on the front-runner. However, quick delegate math essentially canceled out any major boost Cruz stood to win, and the playing field was pretty much evened out.

Since the Republican primary has been so contentious, the primaries on Tuesday should have been a bigger deal than they ever were before. In Utah, for example, leading up to Tuesday, Republican frontrunner Donald Trump was set to lose to Texas Sen. Ted Cruz by eight points. That sort of loss for the billionaire was due to former presidential nominee Mitt Romney's clout in his Mormon state. Romney has been vocal in denouncing the real estate mogul in Utah, even doing robocalls for Cruz despite his apparent disdain for the candidate.

Tuesday was a chance for the growing "anti-Trump" movement to make its voice heard — but by the end of the night, progress on that front seemed dim. Whether or not any of the candidates won the delegates they needed to make important tactical moves in the lead up to the convention is still anyone's call, but for now, it seems that the party stalemate will continue.