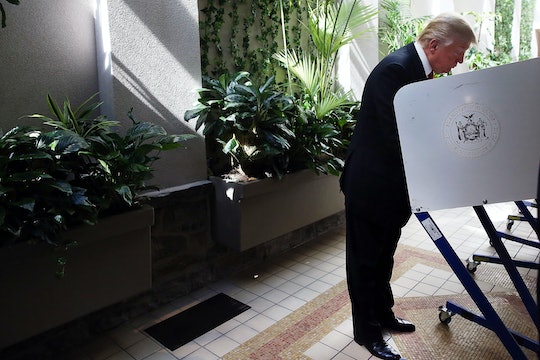 Which Republicans Will Be On The Ballot In New York? It's Not Just Trump & Cruz

Well, New Yorkers, Tuesday is the day you get to weigh in on the highly contentious Republican primary race. Yes, New York, you get to decide whether you want to for Trump, by voting for Trump, or by voting against Trump and voting for one of the other candidates left. Those are pretty much your choices. But, before you resign yourself to which side of the Trumpster fire you'd like to be on, here are a list of Republicans on the ballot in New York today, in addition to Donald Trump.

In true New York fashion, the past weeks leading up to Tuesday's primary vote has been one long media event. Trump has packed rallies, Ohio Gov. John Kasich has tucked into some of the best eats New York has to offer, and Texas Sen. Ted Cruz gave a speech to a room that largely ignored him. Neither Cruz nor Kasich had much hope of winning in New York because it's Trumps home territory. Instead the two are hoping to be mere spoilers and do whatever they can do derail the Trump train on the way to July's Republican convention in Cleveland, Ohio. Here's who's on Tuesday's New York primary ballot and what each candidate needs to do to consider themselves victorious in New York.

First, of course, you've got Trump, who if the polls are anywhere in the neighborhood (borough?) of being right, is going to walk away with a huuuuge win. According to the number nerds at FiveThirtyEight, Trump has more than a 99 percent chance of winning New York. Every poll shows Trump dominating the Republican primary voter field with more than 50 percent of likely voters saying they're for Trump. But, despite his commanding lead, there's still a nail-biter of a race for the Trump campaign to watch in New York: the fight for delegates, because New York isn't winner-take-all.

Trump's only real chance to win the nomination is if he is able to win a majority of the 1,237 delegates. In order to stay on pace to do that, the Trump campaign needs to win at least 50 percent of the vote in all of New York's 27 Congressional districts, so he can will all 95 of the state's delegates. Even winning all 95 delegates won't put him on a sure path to the nomination, but it would be a big momentum shift coming off the embarrassing loss to Cruz in Wisconsin that was widely viewed as an establishment "anti-Trump" vote than a "pro-Cruz" one. To put it plainly, Trump needs to meet or exceed every poll prediction to keep hope alive that he will win the nomination outright and avoid a brokered Republican convention this summer, which would almost certainly hand the nomination to anyone else. Seriously, anyone.

Republican establishment types have been forced onto the Cruz bandwagon by a desire to keep Trump from securing the Republican nomination for president at any cost. Polls show no indication that Cruz poses any threat to Trump in New York, but the Trump opposition is trying to convince voters that a vote for Cruz is a vote to keep Trump from securing the delegates necessary to lock up the nomination. Cruz's prospects in New York were never particularly promising, especially after criticizing Trump's "New York values" earlier in the campaign. But if Cruz can chip off even a few delegates from Trump, the New York primary will likely be viewed as a victory for Camp Cruz.

Kasich is a plain-talking, pragmatic politician who is positioning himself as the only experienced adult in the Republican primary race. But that strategy hasn't produced any real vote dividends. So far, Kasich has only won his home state of Ohio, but said he's committed to staying in the primary race all the way to the Republican Convention. Kasich, along with Cruz, is just hoping to get enough votes to keep Trump from getting 1,237 delegates, denying him enough votes to secure the nomination and forcing the Republicans into an open convention, where Kasich thinks he'll have a good shot at swaying delegates to vote for him. It's a long shot, but Kasich is very committed.

He used to be a respected surgeon, but now Carson is known more for being sleepy, ill-informed and — now that he's dropped out of the race for president — a mildly-effective Trump surrogate. Even though he left the race weeks ago, Carson will still appear on the New York Republican primary ballot. Any chance he could take votes away from Trump with the paperwork error? Today's vote will tell the tale.