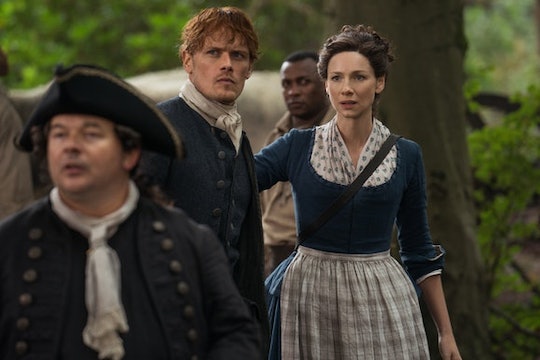 Claire Is Missing One Of Her Wedding Rings On 'Outlander'

In the Outlander Season 4 premiere, Jamie and Claire offered assistance to new character Stephen Bonnet only for it to come back to bite them shortly afterwards. Bonnet is far from a reputable character, but it could be one of his more mild misdeeds from the episode that has lasting ramifications: the theft of Claire's wedding ring. But which ring did Stephen Bonnet steal from Claire? She has two, after all.

Everything began when Claire and Jamie helped Bonnet evade being hanged. As a thank you, Bonnet and his pirate crew attacked the Frasers and their friends, causing them no shortage of injury. Claire wasn't physically hurt, but she was threatened by Bonnet and he did want to take her rings. To prevent that, Claire tried to swallow them, but only succeeded in saving the gold band given to her by Frank. The other ring, Jamie's ring, was snatched by Bonnet, despite Claire's efforts.

This is a deviation from the book Season 4 is based on, Drums of Autumn, where the opposite occurs with the rings. Claire is able to save Jamie's ring but loses Frank's, which ends up causing bigger problems later on. Now, however, there's no predicting what might happen, since the show has taken a different path.

The theft proves what a nefarious character Bonnet is right from the start. Though his initial impression might have been that of a petty criminal who was in a spot of bad luck, the truth was quickly revealed. He swore that he wouldn't bother Jamie and Claire again when they saved his life, but he went back on his word before the episode's end. It didn't matter that Claire and Jamie had showed Bonnet kindness; he saw an opportunity to take advantage of them, so he took it.

And Bonnet's betrayal came at the worst possible time, too. As Claire and Jamie traveled to his aunt's home on a riverboat, she reassured him that her wedding ring (and what it represented) was the only thing she ever needed from him. Crafted from the key to Jamie's ancestral home Lallybroch, it was a nod to his family and his history, as well as a symbol of the new life he and Claire were going to build together. Of course, after the show made a point of reminding the audience how important the ring was, it was stolen by the villainous Bonnet.

There are a few reasons why the Starz series might have changed the stolen ring from the books. As much as Claire cared for Frank, there's no denying that Jamie is the love of her life; his ring might mean more to her, so its loss has more impact for both the characters and the viewers. It's also much more visually distinct.

Switching Jamie's and Frank's rings could be a sign of more changes to come in Season 4, but it might have been a practical decision that doesn't affect the plot much. Claire would want her ring back no matter which one she lost, and either way the theft indicates that Bonnet will be back before long.