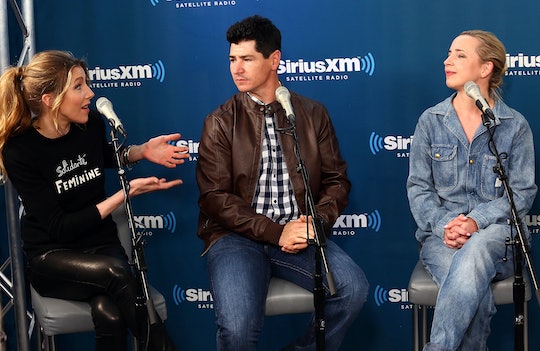 *Most* Of 'The Conners' Are Coming Back This Fall

It's official! A new Roseanne spinoff is coming to ABC this fall in place of the Roseanne revival that was canceled after Roseanne Barr's racist tweet about former White House advisor, Valerie Jerrett. The new series, currently being called The Conners, will follow the Conner family without its matriarch. So, which Roseanne stars will be on The Conners?

According to Deadline, the new spinoff series will feature the entire Roseanne revival cast minus Barr. That includes John Goodman ("Dan"), Laurie Metcalf ("Jackie"), Sara Gilbert ("Darlene"), Lecy Goranson ("Becky"), and Michael Fishman ("D.J."). Reportedly, the actors, who all had two-year deals for Roseanne, signed new one-year contracts for the spinoff. They will apparently be keeping the same salaries of about $300,000 an episode.

Additionally, the writing-producing team that had been in place for the second season of the revival will return for The Conners. The writers reportedly made new deals which earned them raises. The spinoff will also allow the crew to keep their jobs. Due to the time at which the revival was canceled, most shows for the next season were already staffed which means the crew of Roseanne would have most likely been out of jobs for the fall season. Therefore this is definitely a win for everyone involved in the show, as well as ABC.

Soon after Roseanne was canceled, rumors started swirling about a possible spinoff to replace the show. Roseanne was ABC's highest rated series last season and the network definitely wanted to replace it. However, according to Deadline, they were adamant that they would only consider a spinoff if Barr wasn't involved in any way, both creatively and financially. Thankfully, Barr and the show's producer, Tom Werner, were able to come to an agreement. In a statement, the two discussed the importance of the settlement and why the show must go on.

"I regret the circumstances that have caused me to be removed from Roseanne," Barr said. "I agree to the settlement in order that 200 jobs of beloved cast and crew could be saved and I wish the best for everyone involved." Werner added, "We are grateful to have reached this agreement to keep our team working as we continue to explore stories of the Conner family."

Additionally, in their own statement, ABC said, "The Conners' stories demonstrate that families can always find common ground through conversation, laughter, and love. The spinoff will continue to portray contemporary issues that are as relevant today as they were 30 years ago."

Goodman, Metcalf, Gilbert, Goranson, and Fishman also had their own statement:

We have received a tremendous amount of support from fans of our show, and it’s clear that these characters not only have a place in our hearts, but in the hearts and homes of our audience. We all came back last season because we wanted to tell stories about the challenges facing a working-class family today. We are so happy to have the opportunity to return with the cast and crew to continue to share those stories through love and laughter.

As for how Barr's character will be written off the show, ABC hasn't revealed that just yet. However, the synopsis for the new series seems it indicate Roseanne will be killed off. "After a sudden turn of events, the Conners are forced to face the daily struggles of life in Lanford in a way they never have before," it reads. Fans have begun theorizing what could lead to Roseanne's death. Some believe that she'll get knee surgery like Dan promised she would in the revival, but die during the surgery. Others suggest her addiction to pain medication will cause her to overdose.

Regardless of how Roseanne is written off, the fact remains that she will no longer be a part of the series. You can find out what's next in store for the Conners when the new series begins airing this fall.