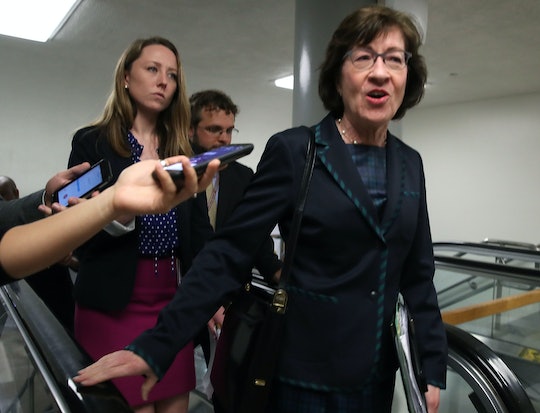 According to the Los Angeles Times, Senate Majority Leader Mitch McConnell had wanted to start procedural votes on the latest health care bill by Wednesday, but some senators are now saying they will block the bill from continuing on to a vote in the coming days. That could mean big trouble for the future of the Better Care Reconciliation Act. So which senators support the health care bill, and which have come out against it? Some leaders are still on the fence about the BCRA, so it's important to know who has already made their minds up, and who needs to get some phone calls from their constituents ASAP.

The BCRA has faced scrutiny from activists, politicians, and everyday Americans opposed to it since it's release last week. But after a report from the Congressional Budget Office showed that it is likely to increase the number of people without health insurance in the United States by 22 million by 2026, according to the Los Angeles Times, the opposition to the BCRA has become even more intense — with good reason. That's a lot of lives affected, and people are making phone calls, sending faxes, and reaching out to their representatives in other ways to make sure their voices are heard in regards to this bill.

Some senators have already announced whether they will vote for the health care bill, or even approve of the vote proceeding. According to CNN, there was a chance that the procedural vote to move the proposal forward would take place Tuesday evening, or possibly Wednesday. But with so many Republicans possibly not backing it, the vote may be delayed until enough representatives support the bill.

According to CNN, Republican leadership can only afford to lose two Republicans on the health care bill vote, and more than that have already voiced concerns, or outright stated that they will not vote for the BCRA as it stands.

CNN reported that Wisconsin Sen. Ron Johnson, Maine Sen. Susan Collins, Nevada Sen. Dean Heller, and Kentucky Sen. Rand Paul are all on record as being against the procedural motion to move the BCRA vote forward. The outlet also reported that Alaska Sen. Lisa Murkowski and Utah Sen. Mike Lee have not declared that they are in opposition to the vote and the bill, but that they may be leaning that way.

So it's all a little confusing right now. The best thing you can do if you're unsure whether your representative supports the bill is to do some research and make some phone calls.

If your senator supports it, or is on the fence, or hasn't said anything either way, and you don't want them to vote for the BCRA, give them a call, or send them a fax, or show up at their office if you're able to do that. If they've said they support it and you don't agree, do the same thing. If they've said they don't support the bill and you're pleased by that, let them know you support that decision. Your representatives needs to hear when you approve of their leadership just as much as they do when you don't agree with them.

I'll make it easy for you. The following is a list of senators that various outlets have said are opposed to the Better Care Reconciliation Act, also known as the newest health care bill before the Senate, and links to their contact information. If you're a constituent of theirs, let them know if you approve of their decision.

And this page lists phone numbers for all United States senators.

According to Slate, four senators are among those "who have expressed discomfort" with voting for the health care bill. You can use the above linked page to look them up, or directly contact them on their websites using the following links:

If the pages don't load right away, be patient. That might mean that a lot of people are trying to contact their representatives, and you should be among them.