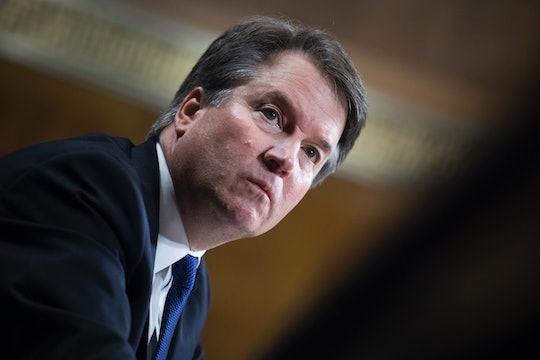 As many are still reeling from the news that President Donald Trump's Supreme Court nominee had officially been confirmed on Saturday, it's logical to wonder which senators vote for Brett Kavanaugh and put the POTUS' divisive and controversial pick in this very powerful seat. It was a narrow call; on Oct. 6, the Senate confirmed Kavanaugh with a 50-48 vote — 49 Republicans and one Democrat.

Saturday's vote came more than a week after Dr. Christine Blasey Ford Kavanaugh testified before the Senate Judiciary Committee regarding allegations that the judge sexually assaulted her while they were both in high school, as The Washington Post reported. After Ford came forward, several other women have since publicly accused Kavanaugh of sexual misconduct, according to The New York Times. Kavanaugh has firmly denied all allegations against him, calling one of them "ridiculous," as CNN reported.

While these allegations were, and are, concerning enough, Kavanaugh's temperament and behavior during his testimony raised red flags for many. As The Washington Post reported last week, more than 2,400 law professors opposed his confirmation, with one calling his demeanor "unprecedented and unfathomable." The American Bar Association also urged senators to delay the vote on the conservative judge until the FBI could conduct a thorough investigation into the allegations, according to The Hill.

And beyond all that, thousands of demonstrators took to the streets of Washington, D.C. last week and after the Senate's vote on Saturday to protest Kavanaugh, according to CNN.

Despite all these efforts to urge senators to have a close and thoughtful look into Trump's SCOTUS pick and to listen to Americans' concerns, Kavanaugh was ultimately confirmed to take a seat on the Supreme Court on Saturday. In addition to the sole Democrat vote from Sen. Joe Manchin (D-West Virginia), CNN reported the Senate vote to confirm Kavanaugh came in as follows:

With Kavanaugh's seat on the Supreme Court secured and the midterm elections just weeks away, every vote and voice counts now more than ever. And, as CBS News reported, Kavanaugh's confirmation is expected to have "a huge impact" on this upcoming election on Nov. 6.

Saturday's vote came as a punch to the gut for many, but the fight is not over. The midterm elections are important — control of the Senate and the U.S. House of Representatives, for instance, will be decided, as noted by Al Jazeera — so make sure you're registered to vote to ensure your voice is heard.