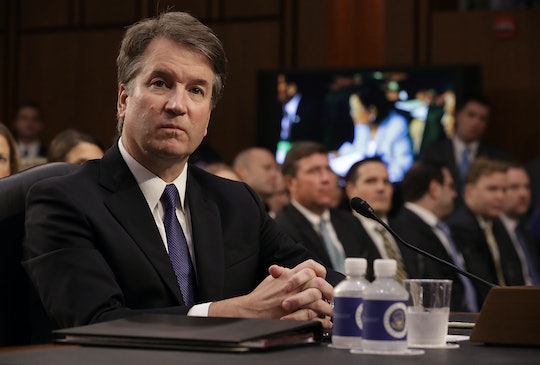 These Are The Senators Likely To Vote For Trump's SCOTUS Pick

President Donald Trump's nomination of Brett Kavanaugh as his pick to fill the vacancy on the Supreme Court has been somewhat of a divisive issue as of late. With the current split nature of the Senate — with Republicans controlling 51 seats and Democrats controlling 49 — it will be a close decision. Wondering which senators will vote for Kavanaugh? Here's who is siding with the POTUS as of now. Republicans need at least 50 votes to confirm him, according to CNN, and it looks like they just might get them.

The exact number of senators behind Kavanaugh being reported by various media outlets varies with Business Insider reporting 49 confirmed yeses, Vox reporting 47, and the Washington Examiner reporting that Sen. Lindsey Graham has predicted as many as 55. "He will get, my belief is 55 or higher. If he does well. I'm sure he will do well," Graham said. "Well, That's 55 last time I checked," Graham replied with a laugh. "I'm not good at math. Yea I think there are a handful of Democrats will vote for judge Kavanaugh if he does well."

A number of republicans have publicly voiced their support for Trump's Supreme Court pick. Senator Rand Paul of Kentucky wrote a series of tweets sharing his opinion of Kavanaugh in late July. "After meeting Judge Kavanaugh and reviewing his record, I have decided to support his nomination," he wrote. "No one will ever completely agree with a nominee (unless of course, you are the nominee). Each nominee however, must be judged on the totality of their views character and opinions."

Many of those supporting Kavanaugh have made their position public. They cite Kavanaugh's experience and constitutional integrity among the reasons to support him. Rubio explained his reason for support in early July. "Brett Kavanaugh is a qualified, mainstream jurist who possesses the right temperament and experience for the position," he said, according to the Sun Sentinel. "And I'm pleased to see his nomination to serve on the US Supreme Court." Shelby made a similar statement that month, as reported by the White House website:

@POTUS's #SCOTUS Pick is an excellent choice. Judge Brett Kavanaugh has impressive credentials, and I look forward to meeting with him to further consider his qualifications & commitment to upholding our Constitution as it is written.

A number of Democrats remain opposed to Kavanaugh though. Among them is Kamala Harris of California. She stated that, "Judge Brett Kavanaugh represents a direct and fundamental threat to that promise of equality and so I will oppose his nomination to the Supreme Court," according to The Atlantic. Bernie Sanders of Vermont also remains opposed. In a press release on his official website, Sanders said:

I do not believe a person with those views should be given a lifetime seat on the Supreme Court. We must mobilize the American people to defeat Trump's right-wing, reactionary nominee.

As Kavanaugh's confirmation hearing proceeds, his fate remains up in the air. Only time will tell if he gets the votes that he needs.