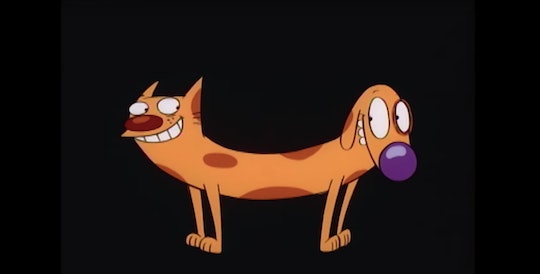 Get Ready For Some Serious Nostalgia, Because You Can Now Stream These 90s Nickelodeon Shows

The disappearance of beloved childhood shows is one of the, frankly, suckier parts of growing up. Shows get cancelled or run their course and disappear off the re-run list entirely. But, there's no need to stress anymore, because NickSplat, a new streaming service for Nickelodeon's 90 classics, now exists. But which shows made the cut?

Nickelodeon recently launched NickSplat, a new video on-demand channel from both VRV and Nickelodeon. According to Entertainment Weekly, NickSplat by itself can be purchased for $5.99 a month. However, VRV's premium, ad-free bundle runs for $9.99 per month, and gives access to channel's besides NickSplat. Currently, VRV is also advertising a 30-day free trial on NickSplat's channel page.

Fans will be happy to note that Nickelodeon uploaded some of its best shows from the 1990s and early 2000s to the platform. According to Entertainment Weekly, hit series like AAAHH!!! Real Monsters, CatDog, Doug, Rocko’s Modern Life, and The Wild Thornberrys are all available for streaming on NickSplat.

There are currently 22 shows available for streaming, according to Polygon, which, in addition to the shows listed above include:

If you didn't see your favorite childhood show on the list, don't fret. It's certainly possible that Nickelodeon will add more in the future. This collaboration between Nickelodeon and Viacom might seem out of the blue, but it actually makes a lot of sense. Eric Berman, head of content partnerships, said, according to Entertainment Weekly:

Our partnership with Viacom is a first of its kind. We’re very proud to be the premiere launch partner to bring a NickSplat channel into SVOD and share these nostalgic series so our passionate audience can fall in love with them all over again.

At one point, Nickelodeon and other children's television networks were heading up the children's entertainment industry. However, earlier this year, Cartoon Brew reported that the ratings of three major kids' cable broadcasters were in an unstoppable free fall. Cartoon Network, Disney Channel, and Nickelodeon were all wrapped up in the ratings drop. According to Cartoon Brew, "ratings are down 20 percent from just a year earlier; ad sales haven’t grown in five years (currently stuck at about $1.2 billion annually); and between 2010-2017, children’s viewership of conventional tv dropped 30 percent."

Much of that had to do with the new popularity of streaming services like Netflix. Although outlets, such as Bloomberg, reported it as "Netflix-Loving Kids Are Killing Cable TV," those levels of dramatics are a little unfair.

Because let's be real: Netflix is cheaper than cable television. If you want to move outside basic broadcasting and access channels like Nickelodeon, you can easily spend $50 a month, as Cost Helper Electronics noted. In addition, Netflix is convenient in its lack of commercials and the fact that it streams. In other words, kids could easily access their favorite shows while out of the house with an iPad or simply your smartphone.

By combining Nickelodeon with a streaming service like VRV, the channel is making a clear step in gaining their audience back.

People may note that favorites like Hey Arnold! are currently missing from the streaming list. The cult-classic Invader Zim is also notably absent, which may be a deal-breaker for fans who need their Zim fix. But, Polygon noted that both shows have made-for-TV movies coming out soon, which may affect their appearance on the network.

If Nickelodeon continues adding shows to the streaming list, they could definitely reel in an increased audience. People will watch for the nostalgia, but plenty of people may also introduce their children or younger siblings to some of their old beloved shows.

Overall, NickSplat is a pretty smart move on Nickelodeon's part, and a way to contend with the new streaming age. And, for anyone who has missed all their childhood shows over the past years, it's bound to help brighten their day.