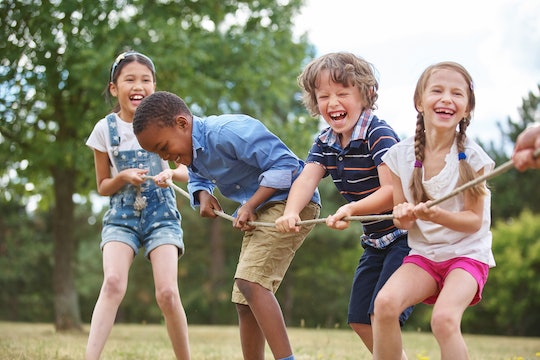 Here Are The Best & Worst Places For Raising Kids, According To Study

If you're planning on starting a family anytime soon, then you're probably looking into a variety of neighborhoods, cities, or even different states to try to find a good place to raise your kids. It can be hard to figure out which states are the best for raising kids, but this study has put together data to reveal the top ten. There's a lot that goes into determining what makes a state good or bad for raising kids, plus, of course, there are other, personal factors that come into play that can't be taken into account in a study such as this one. But, according to national data on a variety of topics, some states might be better than others.

SafeHome.org, which compares home security methods to help people make the best choices for their own homes, analyzed data on child abuse, homicides, school shootings, and poverty, to determine which states are better (or worse) for kids.

The organization noted it kept its areas of measurement broad, stating on its website, "Each of those measures can be understood as a proxy for broader societal problems."

Now, the decision of where to raise kids can be deeply personal. A lot of people like to stay near family, so they don't go too far outside of state boundaries. That's all fine! Nobody is expected to get up and move because of this report, but it will help parents keep track of things in their states that can impact their kid's safety.

What about the worst states?

It's important to note that, although this study is interesting, its categories may be far too broad to offer an expansive view of what states are the best or worst. This means some states rank high on the list, when other data suggests they may not be best for all kids.

For example, although Minnesota ranks in the top 10, the state's Twin Cities metro area ranked among the five worst cities for black people in America. USA Today noted that the Minneapolis-St. Paul area is highly segregated by race, with some of the widest differences in poverty, income, and homeownership between black and white residents in the country.

Hawaii ranked second in the top 10 states, but according to a 2016 article from Hawaii News Now, when accounting for the cost of living, 1 in 6 Hawaii residents live in poverty. In addition, a 2018 study found that Native Hawaiians have the highest poverty rates for individuals and families in Hawaii.

Overall, this study helps to give parents a general idea of which states may be best for kids. But, the entire conversation is far more complicated than what this study accounted for.