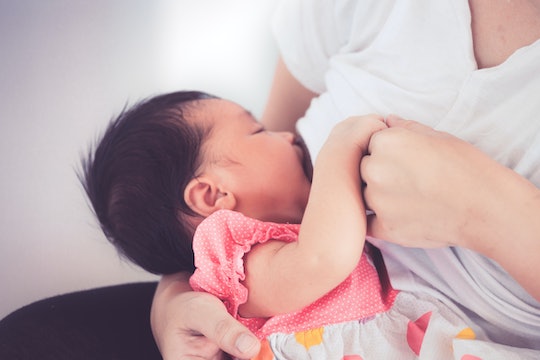 "While jury service is a critically important civic duty, we also know new moms oftentimes juggle countless responsibilities and navigate enormous adjustments in the early stages of their child's life," Cuomo said in a statement released by his office Monday. "This commonsense measure takes that reality into account by providing new moms the flexibility and option to postpone jury service while they care for a newborn."

New York's new law requires any breastfeeding mother seeking to postpone their jury duty service to submit a note from a doctor along with their postponement application. According to Cuomo's office, the note submitted doesn't need to be anything complicated. Rather, it just needs to verify that the applicant is indeed breastfeeding. Additionally, applicants are only able to use the fact that they are breastfeeding to postpone services that have not already happened, been excused, or postponed. The law is set to take effect immediately, according to the governor's office.

But New York isn't the only state to allow breastfeeding parents to postpone jury duty. In fact, 17 other states and Puerto Rico have similar laws, according to the National Conference of State Legislatures.

While at first glance, laws exempting breastfeeding parents from jury duty may not seem like a big deal, they can be vital for parents already juggling the care of young children. Consider the Minnesota mom who told TODAY in 2017 that she'd been prohibited from pumping for an entire morning after reporting for jury duty. (According to TODAY, breastfeeding is not considered a "valid" reason for jury duty exemption in Minnesota.) When finally allowed to pump, the mom told TODAY she was shown to a unisex bathroom, where she had to pump next to a urinal.

Stories like this are exactly why more states should join New York in passing laws that enable breastfeeding parents to postpone jury duty until a later time.

More Like This
Can States Ban The Abortion Pill? FDA Rules May Make That Hard
This Map Illustrates Just How Many States Would Ban Abortion If Roe V. Wade Is Overturned
Breastfeeding Twins: Everything You Need To Know
Your Guide To Taking Tylenol While Breastfeeding