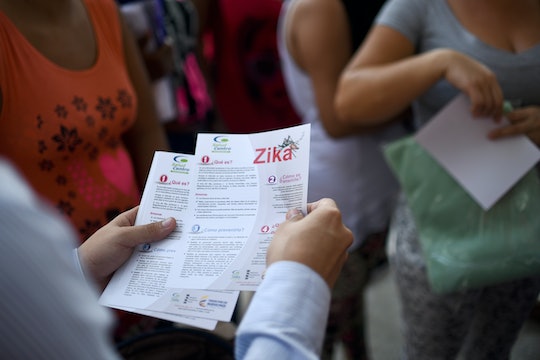 Which States Have The Highest Zika Risk? The South Will Likely Be Affected

For the past year, as the virus continues its rampant spread across the Western Hemisphere, Zika has been making headlines. Spread by a type of mosquito called Aedes aegypti, Zika virus has now become a major health concern for many South and Central American countries, but it hasn’t been spotted as much in the United States — only a few dozen cases have been reported so far. That's about to change. With summer and peak mosquito period approaching, reports of Zika in the continental United States will rise significantly. The National Center for Atmospheric Research recently analyzed the relative risk of 50 U.S. cities and created a map detailing which states had the highest risk of Zika infection. So where and when are the mosquitos that transmit the Zika virus likely to emerge?

The NCAR study, published in PLOS Currents: Outbreaks, examined several factors in the spread of Zika including the seasonal population of the Aedes aegypti, regional weather conditions, and travel patterns to determine the likelihood of outbreaks in each city. Lead study author Andrew Monaghan of NCAR said that “for most people in the United States, there is zero risk right now in the […] end of winter, because it’s cold.” But, he continued, “as you move into summer, you do have more climatic suitability [for the disease] in the U.S.” Meaning the closer to summer we get and the higher the mosquito population, the more likely potential outbreaks are going to occur.

The researchers are clear that the virus isn’t infecting the local mosquito population at this time. They write, “for local transmission to occur [Zika] would have to be introduced by infected travelers or infected mosquitoes and become sustained in local Aedes aegypti mosquito populations.”

The NCAR map shows the areas where, if local mosquitoes became infected, there would be a higher risk of Zika cases in the next few months. These rankings are not a definitive list, rather they show where the critical factors that cause an outbreak are most likely to converge. Cities that have higher travel patterns, larger populations of mosquitoes, and a climate in which mosquitoes thrive are the most at risk of an outbreak.

As you can see on the map above, the high risk cities are mainly located on the Gulf Coast with Florida leading the pack for potential outbreaks.

Some fear the United States could see uncontrollable outbreaks similar to the ones occurring in countries like Brazil and Venezuela, where Zika has infected millions of people and resulted in the rise of a birth defect called microcephaly. However, the Centers for Disease Control and Prevention has assured the public that “any outbreaks of Zika in the continental United States will likely be limited.” This is most likely due to the United States' mosquito population-control methods and the prevalent use of air conditioning and screened windows that can lower bite-exposure.

Even if the United States doesn't face a Zika pandemic on the same scale of other countries, as we move towards the summer months, those who are pregnant or trying to get pregnant in high risk regions should take extra care to protect themselves from mosquito bites. Be sure to use mosquito repellant and cover exposed skin with long sleeves and pants as a measure of precaution.