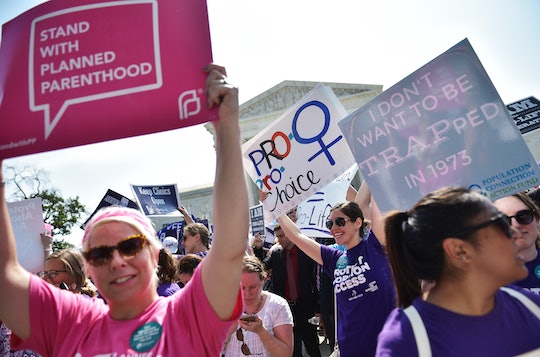 Which States Offer Late-Term Abortions? They Are Very Difficult To Access

GOP Presidential nominee Donald Trump has been prone to saying all sorts of wild things during his time on the campaign trail, but it was his comments on abortion during the final debate that caught the attention of those who are committed to protecting a woman's right to choose in America. Trump's comments about late-term abortion weren't just false, they were dangerous. Here are some facts. Which states offer late-term abortions? There are only a handful that don't have strict limits on how far into her pregnancy a woman can legally access her right to abortion.

During the third and final debate, Trump made a wild and shocking statement about abortion rights in this country.

"If you go with what Hillary is saying, in the ninth month, you can take the baby and rip the baby out of the womb of the mother just prior to the birth of the baby," Trump said, according to the Washington Post.

That's simply not true. As the Post pointed out, if the baby posed a risk to the mother's life in the ninth month of pregnancy, doctors would just induce labor. Killing the baby would be illegal. So much for Trump's argument. Instead of Trump's inaccurate account of how late-term abortions are administered, and under what circumstances, here are a few important facts.

There are only nine states, including the District of Columbia that don't put restrictions on when doctors are permitted to give late-term abortions. According to the Kaiser Family Foundation, only Alaska, Colorado, the District of Columbia, New Hampshire, New Jersey, New Mexico, Oregon, and Vermont don't prohibit late-term abortions. In 2013, there were four doctors in the country who performed abortions after the 20th week of pregnancy, according to Slate. (Current numbers could be even lower.)

Dr. Jen Gunter is an OBGYN who has spoken out forcefully about Trump's false assertions about abortion at the third debate, writing on her blog:

Trump’s statement, as incorrect as it may be, supports the fallacy of the due-date abortion. It is a common anti-choice narrative that women come in at 39 weeks and have some kind of abortion for fun or out of boredom and that we doctors are only too happy to comply. I’m sure some people think there are Groupons. The more graphic the description of the procedure the better as it helps to distract from the facts.

So Dr. Gunter supplied a few facts of her own. Only 1.3 percent of abortions happen at, or after, 21 weeks, she said, and 80 percent of those are the results of catastrophic defects with the fetus. Dr. Gunter continued with a powerful explanation of why women generally seek out procedures like a late-term abortion.

Sometimes it can take weeks or even longer to fully understand what is going on with the fetus. Some patients might think they can make it to term and then at 34 weeks cave and ask to be delivered because they just can’t bear one more person asking them about their baby. Do they just smile and walk away or say, 'Well, actually, my baby has no brain and will die at birth?' Some women go to term and others can’t. To judge these women for requesting an early delivery is cruel on so many levels.

But the fact remains that, according to the Guttmacher Institute, the vast majority of states ban abortions after a certain point in the pregnancy. Some states use the date of the egg's fertilization to start the countdown to fetal viability. Others use the LMP date, or the date of the woman's last menstrual period to determine the first day of pregnancy.

The point is that, despite the constitutionality of abortion across the country, individual states are constantly considering and passing legislation that chips away at reproductive rights, and the rights of a woman to access reproductive healthcare can be vastly different across one state line or another.

But Trump's false claims of ninth month abortion, according to Dr. Gunter, is flatly wrong. Which, as she smartly points out, "underscores how important it is for politicians to not practice medicine."

She's got a point.