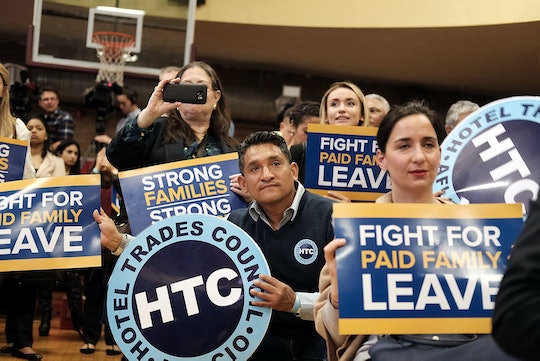 Winds of change are finally beginning to blow in the direction of workforce benefits and paid family leave in the United States, but it's been a slow process for the country — and there is a long way to go. Last week, Vermont joined four other states in requiring companies to offer their employees at least three paid sick days a year, according to The Guardian. The number of states that offer paid family leave is even smaller: only Rhode Island, New Jersey, and California offer it at the moment.

It's not for lack of trying that the number of states offering paid leave remains so low. In 2015, President Barack Obama said he would call on Congress to approve the Healthy Families Act, which would give every American worker at least seven days of sick leave a year (because, strangely enough, nothing like that currently exists). The Family and Medical Insurance Leave Act — also known as the FAMILY Act — is another piece of legislation, proposed in 2013, that would provide up to 12 weeks of partial pay (up to $1,000 a week) in the event of a birth or adoption or a serious illness in the family.

As many pieces of legislation do once they hit Congress, however, both proposals have stalled. This means change has fallen into the hands of local state governments and individual corporations who are, slowly, taking up the call. Even presidential candidates have been slow to formally endorse paid family leave. White both Vermont Sen. Bernie Sanders and former Secretary of State Hillary Clinton support the existence of federal paid family leave legislation, only Sanders has it formally outlined in his platform.

Corporations can do as they please, and many have: Google, Adobe, Microsoft, Facebook, and Twitter all offer over 10 weeks of parental leave; Netflix generously offers a full year of paid leave. On the governmental side, pressure is increasing as well: New York Gov. Andrew Cuomo has been rallying support for his proposal for paid family leave recently, and, in Minnesota, Democrats put forth a bill to provide paid leave for all 135,000 workers in the state, according to CBS. And yet, despite the push, there are still plenty of objections, with opponents citing that it would place an unfair burden on businesses big and small.

"We have heard concerns from employers of all size that a mandatory paid leave law, as proposed for New York, will impose significant compliance and staffing challenges," Heather Briccetti, president and CEO of the Business Council, told Syracuse. "The Business Council of New York State encourages our lawmakers to avoid adding extra burdens on employers."

However, a Harvard Business Review survey in 2010 found that a large majority of California businesses had not been affected by the implementation of paid leave at all. Since paid leave is structured much the same way as insurance is — i.e., it is paid into by the employees, not the employer — there are no direct costs to the corporation. In fact, most employers said that the change had either no noticeable effect on their business or a positive one.

It seems like change is slowly arriving, and it's uplifting to see some states and big name companies lead the way — however, the 40 percent of the national workforce that isn't covered by existing laws needs change, and they need it faster than it's currently arriving.