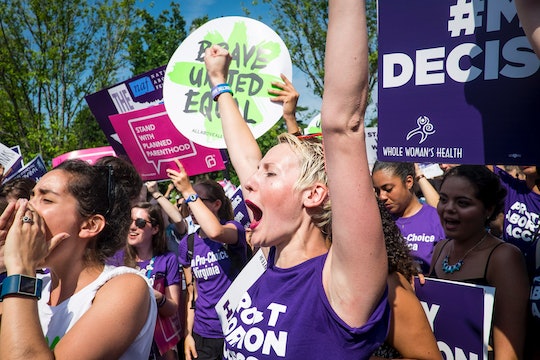 On Tuesday, those who believe in a woman's right to choose rejoiced at the Supreme Court's decision to strike down a Texas law that severely limited access to abortions. The decision will likely have implications far beyond the Lone Star State. Many other states restrict access to abortions in similar ways, and while this decision did not automatically strike down the laws in those states, it does provide a future basis for those laws to potentially be thrown out. In the meantime, though, women all over the country still find their constitutionally-protected rights threatened and limited.

Thanks to Tuesday's 5-3 decision in Whole Woman's Health v. Hellerstedt, the state can no longer require clinics that perform abortions to have hospital-grade standards and doctors with admitting privileges at nearby hospitals. These requirements placed severe financial strain on many clinics, and caused many of them to close.

Proponents of the restrictions claimed they were necessary to protect women's health in the event of complications from abortions, although many have pointed out that those sorts of complications are incredibly rare. Still, many other states copied Texas by imposing similar laws of their own, as well as ever-more-inventive restrictions, like ones requiring women to look at an ultrasound of the fetus, or to wait at least 24 hours in between receiving counseling about things like the fetus's purported ability to feel pain and getting the actual abortion.

According to The Washington Post, 10 other states have laws similar to the one in Texas requiring abortion doctors to have admitting privileges at nearby hospitals, including Missouri, North Dakota, Tennessee, Utah, Alabama, Kansas, Louisiana, Mississippi, Oklahoma, and Wisconsin, although the laws in the latter six states are currently being challenged. As for the part of the law requiring hospital-grade standards, many states have some sort of requirements, but five states in particular have similarly restrictive policies: Michigan, Missouri, Pennsylvania, Tennessee, and Virginia.

Plenty of other states have laws that aren't restrictive in the same ways as the Texas one, but that still serve to keep women from getting the health care they want. According to the same Washington Post article, 31 states have at least one major restriction, whether it's to do with mandatory waiting periods (in Utah, for example, women have to wait 72 hours after their counseling visit to obtain an abortion), health insurance restrictions, or banning abortions after 20 weeks.

It's clear that Tuesday's Supreme Court decision is only the first step in ensuring greater reproductive freedom across the entire country, but it's certainly promising for those who believe that women should be able to control what happens to their own bodies.