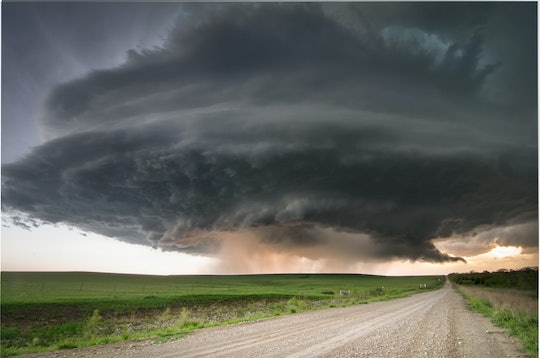 Which States Will Get Severe Weather? Forecasters Are Concerned It Could Get Ugly

Midwestern regions of the United States are bracing themselves for some strong and possibly destructive storms this week. Severe storms and isolated tornadoes are expected to hit on Tuesday afternoon and continue until Wednesday throughout much of the central plains region and southern states. As memories of the deadly 2011 tornado outbreak begin to resurface, some may be wondering: Which states will get severe weather? The forecast looks widespread and intense for at least a handful of regions.

AccuWeather has reported that areas all the way from Austin, Texas to Omaha, Nebraska are on alert for some dangerous weather that is likely to make an appearance Tuesday afternoon until Wednesday morning. Take special note if you are in or near Dallas, Kansas City, Missouri, or Fort Smith, Arkansas: The Weather Channel is reporting that violent storms are expected to hit those areas the hardest, and warn that southeastern Nebraska and southern Iowa might see some action as well. Severe storms with the possibility of isolated tornadoes are expected to hit during midday on Tuesday in parts of Missouri.

You should also consider making a plan if you’re near Oklahoma City, Wichita, or Salina, Kansas. The forecast for those regions too is expected to be particularly strong, with tornadoes predicted to roll through there late on Tuesday afternoon or evening, according to AccuWeather.

April is an infamously stormy month and the risk for tornadoes tends to peak due to a combination of the change in climate and moisture in the air. Tornado season— the time of the year we see most tornadoes — typically runs from early spring through mid-summer. While tornadoes can happen any time of the year, April tends to be the busiest time of the year for severe storms, mostly due to the fact that warm and cool air first begin to heavily collide during those weeks.

Tuesday’s storms are predicted to be the worst of the year so far, and forecasters suspect that they will threaten both lives and property. According to AccuWeather Assistant Director of Storm Warning Services Andrew Gagnon, the severe storms are expected to bring in large hail and harsh, damaging winds.

“The storms on Tuesday have the greatest potential to produce numerous tornadoes, including some [wedge] tornadoes that could be on the ground for an extended period of time,” Gagnon told AccuWeather.com this week. A wedge tornado is one that is as wide as it is tall; These monsters, like most tornadoes, typically form when warm, humid air from the south collides with cold, dry air from the north, after which it meets with a strong vertical draft and unstable atmosphere. Wedge tornadoes in particular generally consist of a single-vortex structure (meaning no smaller tornadoes surround it). According to NOAA, these types of tornadoes often produce heavy damage, although its classification does not necessarily equate to a certain strength on the enhanced Fujita Scale.

Severe thunderstorms are also expected to hit Chicago on Monday night, with severe weather watched in effect until 10 p.m., when the brunt of the storm makes its way to Tornado Alley.

Storms like these can be daunting and frightening, so make sure you are prepared if you happen to be caught in a twister’s path. Stock up on snacks, water, and maybe some wine. Make sure your laptops, tablets, and phones are fully charged. Perhaps invest in a portable battery for your devices just it case. Grab a buddy to wait out the storm with and snap some photos of the dark gloomy skies (safely, of course).