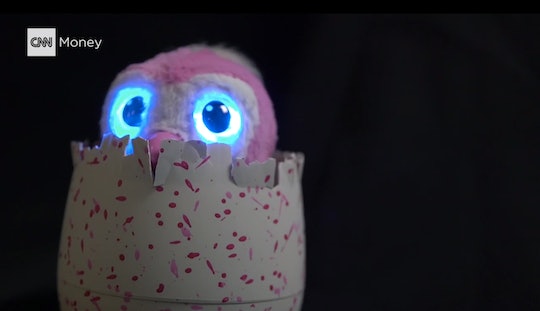 Which Stores Are Still Selling Hatchimals? You'll Have To Get Thrifty

If you've slept on this season's top-selling toy, it unfortunately might already be too late to snag one for the holidays — unless, of course, you're ready to fight for it. This generation's Furbies — called Hatchimals — have already been swept off the shelves. So which stores are still selling Hatchimals, you ask? Whereas traditional toy stores are pretty much out of the game, there are a few sneaky online vendors that you can tap into.

If you're not sure what the hype's all about, the main reason why Hatchimals are so popular has to do with their novel first few minutes. Hatchimals start in the form of an "egg." After they break out of the egg due to a series of rubs and taps, symbolizing love and care, they can't go back, so you're pretty much stuck with your run-of-the-mill animate stuffed animal. One mom wrote a review of Hatchimals on behalf of her 7-year-old, and shared the following insight:

Thought I would write a review as all I'm seeing is parents desperate to get their hands on one. So this one is one week old and has been played with for a few hour! The best bit was it hatching and then we had to break it out as it wasn't working! It grew up from a baby to fully grown in a few hours, it doesn't talk, it just records the child's voice and plays it back, has a few games that are boring and once played they don't want to play again. All you can do is feed it by tilting it forward, stroke it when it gets cold and pat its head if it's scared. Also once you take it out of the box it starts hatching takes around 20 mins to an hour so make sure your children are ready to sit with it and help it hatch. Overall not worth the money.

"Not worth the money" meaning that she wouldn't likely shell out the $49.99 again — a price which, at present, would actually be a steal. Hatchimals have been selling on auction sites like eBay and Craigslist for $200 to $300, easy. One lister even has their Hatchimals selling for $25,000, with the disclaimer that the funds are sorely needed.

If you absolutely have to have a Hatchimal, going to Target or Walmart won't cut it; You'll need to resort to eBay, Amazon, or a similar type of site. One mother from the U.K. actually found a Hatchimals hack which bought her multiple toys for a little under $100. Here's the secret: Visit Amazon's website using a different country's URL. In her case, she typed in Italy's URL, "Amazon.it," and found the Hatchimals for £65 a piece (about $80 USD). Other mothers found similar success with this method.

Christmas is fast-approaching and Hatchimals are already a must-have. Desperate times call for desperate measures, so get ready for some cutthroat bidding wars. If you can wait, though, more Hatchimals will be released in 2017. More importantly, if you can stand the delay, you'll probably save yourself a couple hundred bucks.