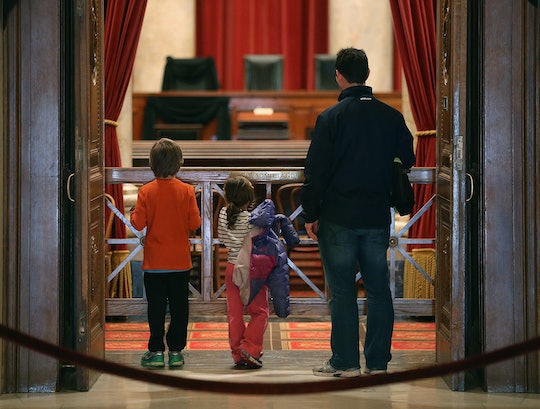 SCOTUS Cases To Know, Ahead Of The Nomination

President Trump said this week that he plans on announcing his pick for the Supreme Court on Tuesday night at 8 p.m. Eastern Time. While everyone is anxious to find out who will get the final SCOTUS rose and whether Senate Democrats will filibuster his nomination, there are actually some major Supreme Court cases on the line, if Trump's pick is appointed to the court, that could change the political landscape significantly. Here's something to remember, though: Senate Democrats will most definitely try to block whoever Trump nominates, in the name of ensuring that the court doesn't swing too far to the right.

Although the Supreme Court has reached some decisions with only eight justices, there are just as many that ended in straight up ties. And with some important cases on the calendar this term, and if Trump surprises everyone and nominates a moderate judge to take Justice Antonin Scalia's seat, the Senate could confirm someone within a few months, who would then be able to weigh in.

This is where it gets a little tricky, though: Since the court has been in session since October, and has already heard arguments on some cases that they haven't ruled on, if confirmed, the new justice could technically start ruling on cases, even if they haven't heard oral arguments. (They'd just have lots of reading to do, to play catch-up.)

According to Amy Howe, a writer for SCOTUS Blog, "that is not really what they have done in recent years."

It's a little weird for a judge to start ruling on cases they didn't hear — since that's kind of their whole job. But Trump and his team aren't exactly known for for following traditions or abiding by unspoken D.C. code.

So in the case of a confirmation come, say, March, here are some major cases that Trump's pick could sway, and of which you need to be aware.

This case concerns a transgender boy taking his West Virginia school to court over whether or not he can use the boys bathroom. The briefing period was recently extended so the court hasn't heard arguments yet at all, which means that a quickly confirmed justice might make it just in time. Although, Howe told Romper, "there is a good chance that the Trump Department of Education, when it has people on board, could either rescind the opinion letter that is at the heart of the case or issue a new one, which could gut much of the case." So either way, any of Trump's nominations might destroy this one down the line.

This is a case that will decide whether a court was right or not when it allowed for racial gerrymandering in Virginia — and with all the talk of voter fraud and suppression in November 2016, this issue is a big deal. It was already argued in December, but there are no opinions yet. If Trump's pick decides to hop on board right away, they could sway a vote in the right's favor.

This case sounds so silly on paper — Trinity Lutheran wanted mulch for its playground. But the Missouri’s Department of Natural Resources denied the application for a grant that would pay for it, citing a clause that says state money can't go directly, or indirectly, to a religious institution. The First Amendment’s Free Exercise Clause and the Fourteenth Amendment’s Equal Protection Clause are at stake here. Briefing has begun, but it hasn't been argued yet, so Trump's pick could be able to catch up and vote.

This is a case that was deadlocked last March, after Scalia's death. It's specifically about whether a teachers union, or public employees, have to pay union fees. But it gets to the heart of collective bargaining issues and the future of unions. It's likely to make its way back to the court eventually and Trump's pick would be all over it.

This is a huge one, as it will determine whether it violates the Eighth Amendment to not adhere to current medical standards when it comes to determining "intellectual disability" and if an intellectually disabled person can be executed or not. Again, it was argued earlier this term, but there's still no opinion so regulating capital punishment is on the line. And we know how Trump and his administration feels about regulations, right?

This one is especially timely, given Trump's policies concerning immigration. The court will have to decide if a the term "crime of violence" in another law is too vague, and possibly unconstitutional, when it comes to federal immigration. Argued earlier this month, a quickly confirmed Trump appointee might have ~some thoughts~ about this one.

There are tons of cases, though, that the Supreme Court is hearing this term, and any number of them could be affected by a Trump pick, though it's also likely that it won't be until next year that we will get to see how the Supreme Court changes. And there will be some major, sexier issues at stake, such as Trump's temporary immigration ban and most definitely women's reproductive rights, as Trump's right hand man, Vice President Mike Pence, is getting ready to ditch Roe v. Wade altogether.

In addition to that, given the ages of the current justices, it's very possible that Trump will have to nominate another justice within the next four (or possibly eight!) years. So it might be best to brush up on your Supreme Court lingo now before things start to get wild.