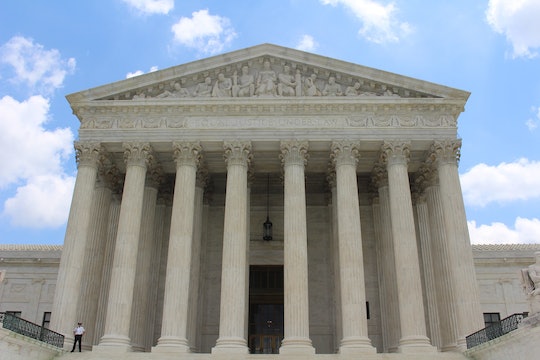 These Supreme Court Justices Are Liberal-Leaning

On Tuesday, President Trump is expected to make his announcement regarding the appointment of a new justice to the Supreme Court. He's gone on record as saying he plans to appoint a conservative, anti-choice justice, and his potential short list of candidates seems to reflect that. Which Supreme Court justices are liberal? Since the current justices are evenly split by party, Trump's appointment will tip the scales of justice.

Currently there are four justices who are members of the Democratic party: Elena Kagen, Sonia Sotomayer, Stephen Breyer and Ruth Bader Ginsberg. Of the four, Sotomayer is considered to be the most liberal and Breyer is the least. Kagen, who was appointed by Obama, is also fairly liberally leaning, while Ginsberg (the Notorious RBG, as she is affectionately known on the internet) can lean a little more moderately on certain issues; namely, economics.

It's not every day that a president gets to appoint a new justice to the Supreme Court: the justices serve life terms, which means the only time a new appointment is made is when someone dies or retires. Anthony Scalia, who had been on the Supreme Court since the 1980s when he was appointed by Ronald Reagan, died last year. The vacancy technically fell under Obama's presidency, but it was ultimately decided that, since it was an election year, the appointment would be made by the next president.

Trump's list of potential Supreme Court nominees was released even before the election, and included 21 individuals — all of whom are conservatives. This, of course, isn't surprising since any sitting president would likely appoint a justice who would be most likely to fall in line with the administration's political leanings. Since Scalia's death, the court has been split right down the middle as far as partisanship: there are currently four Democrats and four Republicans, meaning that if Trump appoints a Republican justice, that will give the conservative party the majority.

In fact, it would mean that pretty much every executive branch of the government would be under conservative majority: so is Congress. This is advantageous to Trump's administration, but, as many have already started to point out, could be catastrophic for millions of Americans whose constitutional rights are already under fire.

Of concern when it comes to the Supreme Court, even Trump has admitted that he intends to appoint a justice who will side with him when it comes to Roe v. Wade. Legislation meant to dismantle the case, which makes abortion constitutionally legal in the U.S., has already been introduced to Congress, and many fear that a Republican-lead Supreme Court could overturn it.

When it comes to procedure, though, whoever Trump announces as his appointee on Tuesday still has to go through several hearings before Congress before the appointment will be set in stone. Not unlike the various members of Trump's cabinet, some of whom are still unconfirmed as the call for additional hearings has been made.

Trump and the Senate Judiciary Committee are actually under a little pressure from history to get the confirmation approved: they have until March to make it happen before they'll set the new record for the longest Supreme Court vacancy in history. The prior record was 391 days from the resignation of Abe Fortas in May 1969 to the confirmation of Harry A. Blackmun in June 1970. Scalia died on Feb. 13, 2016, meaning the current vacancy is already near to a full year, and with the time it usually takes for confirmations to be made, it could very well be a record-setting one.